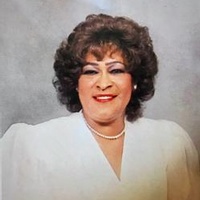 On October 10, 1939, Rev. J.F. Harris and Viola Marie Harris became the proud parents of a baby girl, whom they named Gloria Evelyn, and affectionately called her Peaches. Gloria was the youngest of four children. She was blessed and baptized at six weeks of age, in Camden, Arkansas. Due to a pastoral assignment, her family moved to Tulsa, Oklahoma when she was two years of age. After living in various areas in Oklahoma, she graduated from Booker T. Washington of Tulsa, Oklahoma in 1957. She was preceded in death by both parents, two brothers, Lawrence Harris and J.F. Harris, Jr. and two sisters, Almarine Batts and Joanna Bluford.

Upon graduation from high school, Gloria attended Shorter College in North Little Rock, Arkansas and obtained an Associate Degree. She then attended Arkansas A.M.N College, and graduated from Washburn University in Topeka, Kansas. Later she attended Tulsa University where she studied for her Master’s Degree.

Gloria was baptized at St. John A.M.E as an infant and rededicated her life to God as a pre-teen. Over the years she served in many capacities of the ministry and various organizations until the end. In addition to her commitment to the church, she was a faithful and loyal member of the B.T.W Class of 1957, where she served as president and a member of the Delta Sigma Theta Sorority. On February 12, 1961, Gloria married Orvie Lee Oates, and to that union twin daughters were born.

On October 15, 2017, Gloria was called from this life to receive her rewards. She leaves to cherish her precious memories two daughters, Stephanie Oates (Houston, TX), Sabina Gibbs (Dallas, TX), two grandchildren, Ashley Hill and April Gibbs and a great grandson Grayson Pablo, a precious son in law, Timothy Gibbs (Dallas, TX), a very special friend Barbara Jackson and a host of nieces and nephews that loved her dearly.
“When caring truly matters,DYER cares.”