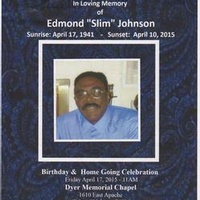 Edmond “Slim” Johnson retired to his Heavenly home on April 10, 2015 after a valiant battle with a long illness. His devotion to his family and his firm belief in God supported him in his struggle and ultimately gave him peace.

Edmond was born on April 17, 1941 in Saskwa, Oklahoma to Mary Brooks and Oliver Johnson. Edmond accepted Christ as his Lord and Savior at an early age. He graduated from the Oklahoma School for the Deaf and Hard of Hearing in 1960.

In 1961, Edmond moved to Tulsa, Oklahoma. He later became a licensed mechanic journeyman. “Slim” was a socially active man who was deeply involved in building and remodeling cars. He was a member of the Black Race Car Association and the Southwest Street Rod Car Club. He enjoyed teaching and showing people his cars and reminiscing over his younger years going to the drag races. He would always say, ” people are going to remember me as the Man with the baddest cars in town.”

He was employed at Hillcrest Medical Center as a maintenance man for 25 years before retiring. After retiring he found gainful part-time employment with Wal-mart until his departure.

He was preceded in death by his parents, Mary Brooks and Oliver Johnson; brothers, Elbert Dumas, Hiawatha Johnson and Myron Johnson; a sister, Barnetta Payne.

Mr. Edmond Johnson’s celebration of life will be on his birthday, Friday, April 17, 2015 at 11am at the Alfred C. Dyer Memorial Chapel.