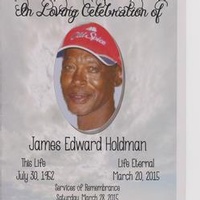 James Edward Holdman, the son of Alice and John Buster Holdman was born the fourth of eleven children, July 30, 1952 in Tulsa, Oklahoma. James was preceded in death by his father, two brothers and a sister.

James grew up and attended Tulsa Public Schools and later graduated with a G.E.D. Learning all he could, James went on to receive an associate degree in Engineering Technology from Tulsa Community College. He accepted Christ at an early age and united with the Church of the Living God #53 under Bishop L.M. Musgrove and became a minister at Shiloh Baptist Church. He later became a member of his brothers church, Faith, Hope and Charity Christian Center until his passing. He met and married Pinkie Holdman and to this union two children were born. James Holdman Jr and Marvelle Holdman. He was also the father of Charles, Hollis, Michael Sims and Janene Sims

James enjoyed watching movies cowboys, sports, Andy Griffith and spending time with his buddies. When his mothers health started to decline, James moved in to take care of her until he was no longer able to.

After a lengthy illness, James departed this life on March 20,2015 at the age of 62. Though confined to a bed in his last day, James never lost his faith nor became restless or discouraged. He will be missed and remembered in our hearts forever.