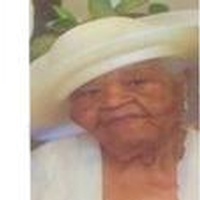 Elvie M. Toliver was born to the proud parents Arthur W. and Amanda Palmer Jones on November 7, 1910 in Shawnee, Oklahoma. She was prceded in death by her parents and brothers Washington Jones, and Arthur Jone and Lee Jones Sr.

Elvie lived through the Great Depression trying to make a life for her and son George Jr, Jr. She worked as a beautician, a seamstress and a domestic.

A giving person in word an deed, Elvie’s philanthropy was most directed toward children. She began Granny’s Children in 2006. Her heart’s desire was to ensure that children were fed and prospered in a positive environment. This charity, still active today, exemplifies her spirit of giving. She also sponsored Cara Cares (focused on the needs of children) established by her nephew, Lewis Bumpers, Jr.

Elvie took wings into Heaven at the age of 101 years on November 14, 2011 at Hillcrest Medical Center in Tulsa, Oklahoma.

She is survived by her granddaughters, Marilyn s. Washington, Annetta B. Burden and Alberta L. Leach; grandson, Austion D. Behn; great and great-great grandchildren; nieces and nephews; trusted friends for many years, Ronald M. Edd and Frank Cotton; and a host of friends both far and near.