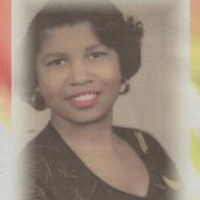 It was a brisk spring morning on April 22, 1920 that a pretty baby girl name Edna Marie Jones was born in Muskogee, OK to the loving parents of Rena Jones, and Sammie Jones. she was a welcomed addition to the family.

Edna grew up in Muskogee OK, as a young girl, and received some of her formal education there. The family later moved to Tulsa, OK, and it was there that she completed her studies.

As a young woman Edna left Tulsa, and moved to Springfield, MO, while there, she worked at one of the local hospitals. In her Mid life she moved back to Tulsa, OK, and on September 8, 1951, at the age 31, married Lloyd H. Lewis, and to this union one daughter Bernice was reared. During those days Edna worked at Hillcrest Hospital.

Edna was a member of St. Andrew Baptist Church, and worked diligently in the Missionary Society. Edna lived a quiet life, but definitely left her footprints in the sand. She took comfort in reading the 23rd Psalms.

it was during the early morning hours of October 26, 2011, that God called Edna’s name, she answered and went home to eternal rest. Meeting her at heaven’s gate were her parents, her daughter Bernice Robinson, her brother Haywood Jones, her sisters Lee Anna Jones, Velma Evans, and Charlesetta Lewis.

She leaves behind to lament her passing her cousins AW & Minnie Sells, Helen & Bob Mitchell, Senora Tolbert, Don & Johnnie Sells, Willie & Irene Sells, Sandra Sells, Esther & Jimmie Marshall and Doug Sells, all of Tulsa OK, along with a host of other relatives and friends.