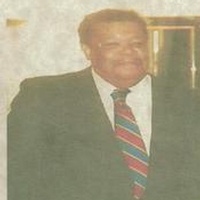 Reflections The Life of Nathaniel Sampson.

Eufaula Oklahoma was never the same after the arrival of Nathaniel Sampson on October 31, 1931. His parents James and Beulah Sampson welcomed their new son into the family. Nathaniel was the fourth child of twelve joining the Sampson Clan.

Nathaniel was about 11 years old when the Sampson family left Eufaula and moved to Lubbock TX. He received the remainder of his formal education there.

As a young man Nathaniel found enjoyment playing in a band, he was a drummer. It was during his young adult days that he met and married Agnes, and joined the United States Army. Together they raised five children, Lee Edward, Wendell, Keith, Rene’, and Gerald Wayne.

He ended his military duty, and after years of being together Nathaniel and Agnes marriage was resolved, but his relationship with his children remained. Nathaniel moved to Colorado, and it was there that he met another fine young lady, they were married but there were no children from this union. Nathaniel lived in Kansas City for a short time, but later settled in Tulsa, OK, and remained a single man,until the day he passed.

Nathaniel worked as a photograph framer, and continued to be a traveling musician. He later became employed with Tulsa County Court House and at age 62 retired.

Nathaniel was a dedicated member of New Life Family Outeach Church for ten years. In 2004 he became an Ordained Deacon, serving faithfully until his health began to fail.

On October 30, during the 69 year of his life, God called his name, he answered the call and went home to eternal rest. Being met at heaven’s gate by his parents, son Gerald Wayne, brothers, Azzie, Walter Lee, Louis,James Elliot, Bobby, Arlander,Billy and sisters Luvenia and Myrtal.

Leaving behind to lament his passing one sister Reather Dever of Tulsa, his children, Lee Edward Johnson of Ok. City, OK; Wendell Sampson of Kansas City, KS; Rena’ Sampson and Keith Sampson of Tulsa, OK; along with a host of grandchildren, great grandchildren, nieces, nephews, cousins and friends.