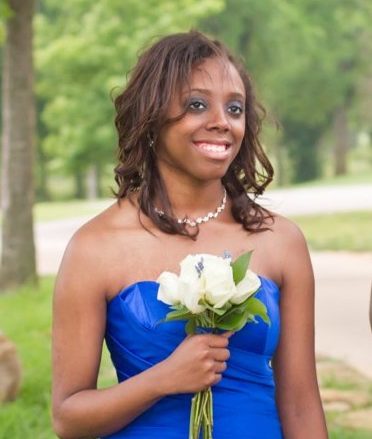 Wylycia Alexandria Jones was born November 24, 1989 in Muskogee, Oklahoma to parents Wyly McDowell and Kimberly Jones. She was raised by her grandmother Stella Jones Childers, and spent her earliest years living in Wichita, Kansas before the family returned to Muskogee. She accepted Jesus Christ as her Lord and Savior and was baptized at First Missionary Baptist Church.

“Wy,” one of her many nicknames, entered 2nd grade at Sadler Arts Academy where she excelled in the arts curriculum, performed in The Nutcracker productions, and joined the school band as a clarinetist. She also took piano lessons for several years under the tutelage of Denise Elliott. She continued her education at the Muskogee 7th & 8th Grade Center, where she joined the basketball team, and continued the clarinet, at one point earning a position in the All-District Honors Band. Wy also enjoyed singing and was at times a member of her school and church choirs. At Muskogee High School, Wylycia continued to display her impressive athletic talent as a member of the varsity Soccer team and in cross-country as a member of the Track & Field team. Wy was endowed with an incredible intelligence, even scoring in the 99th percentile on the Iowa standardized test in elementary school. Early on her teachers advocated for her to “skip” a grade and she received numerous awards recognizing her scholastic achievements. After graduating from high school in 2008, she enrolled in Bacone College.

In 2011, Wylycia was diagnosed with Lupus, an autoimmune disease she battled gracefully until the end of her life. Despite some setbacks brought on by this condition, Wy continued to set new goals for herself and to live life to the fullest. She completed schooling at Community Care College in 2013 and became a certified pharmacy technician. At the time of her transition, she was nearing completion of her Bachelor’s in General Studies specializing in Accounting at Northeastern State University.  She loved her grandmother dearly and elected live in Muskogee so that she was always nearby. Stella could always depend on Wylycia to handle any affair she needed, leading Wy to list herself in grandma’s phone as “Administrative Assistant,” which she emphasized was an unpaid position. Wylycia also loved her nieces and nephews, whether biologic or formed through the many strong bonds of friendship she developed over her lifetime. She spent many hours facetiming, babysitting, and caring for the children in her life. She never missed an opportunity to show up for those she loved, and who loved her, and enjoyed a strong network of childhood friends.

Wylycia surrendered her soul on March 2, 2022. Those who greeted her warmly on her arrival to reward include her great grandmother Elizabeth Chamberlain, her father Wyly McDowell, her beloved Aunt Arnesha “Juicy” Luckey, her uncle Donald “Baby” Criner, her step-grandfather Marion Childers and many great-aunts, uncles, and cousins.