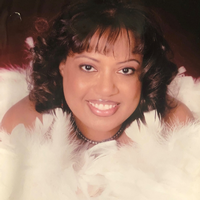 “For I am already poured out like a drink offering, and the time has come for my departure. I have fought the good fight, I have finished the race, I have kept the faith. Now there is in store for me the crown of righteousness, which the Lord, the righteous Judge, will award me on that day, and not only to me, but also to all who have longed for His appearing”.

On July 21, 1969, a beautiful baby girl was born to Lawrence, Sr. and Sharon Stevens in Tulsa, Oklahoma. She was born 10 minutes after her twin sister and was affectionately named Sherice Lynee’. After the passing of her biological father, she was adopted by her father, Alfred C. Dyer at a young age.

Sherice received her formal education from the Tulsa Public Schools, lastly attending and graduating from Booker T. Washington High School in 1988. She attended Tulsa Junior College and earned a Business Associates Degree. In July 1993, she relocated to Lawrenceville, Georgia and made it her home. She was employed with World Toyota in Atlanta, Georgia as the Tag and Title Clerk and was soon promoted to Controller. In 2009, she became employed with AAA Parking in Atlanta as the HR Manager. She remained employed with AAA Parking until late 2017 after her health failed.

Sherice was a First Class Lady. She lived her life in such a way that she will forever be remembered for her kindness, compassion, fairness, character and benevolence. She loved her family and being a grandmother was one of her greatest joys in life.

On December 29, 2018, Sherice Lynee’ dozed in eternity to a place of “No More”. Meeting her at Heaven’s Gate will gladly be her fathers, Lawrence Stevens, Sr. and Alfred C. Dyer, and her sister, Dona Marie Sampson, her grandmothers and two special Aunts.