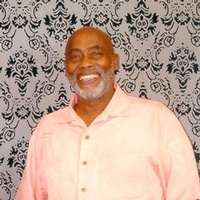 On Wednesday, April 17, 2019, Rickey Eugene Gunn fell asleep in the arms of Jesus with his Angles by his side.

In the summer of 1956, August 25, Rickey Eugene Gunn was born to Richard and LaVetta Gunn in Omaha, Nebraska, moving to Shawnee, Oklahoma at an early age. The family then moved to Tulsa in 1962 where Rickey began his education in Tulsa Public Schools, graduating from McLain High School in 1974.

At a very early age, Rickey found a loving friendship with a neighborhood pastor and his wife which led him to membership at New Jerusalem Baptist Church where he attended through his early and adult life with his family. After many years, Rickey was reunited with a dear friend and served faithfully as Deacon until his departure. It was at Solid Rock 7th Day Baptist that Rickey met and married his current wife, Marsha.

Rickey never met a stranger. He was a loving and sociable person who loved with a big heart. He was generous and kind-hearted, always working to put a smile on the faces of those who were dear to him.

Although Rickey’s parents proceeded him in death, he leaves to cherish his memory, his wife, Marsha, his many, many, many children and grandchildren, his sisters, his bonus Mom, his Solid Rock Church family, and a host of relatives and friends.