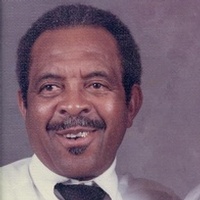 “Just A Closer Walk With Thee”

On February 13th of 1926, James Singleton was born to Reverend Joseph Singleton and Sylvasta (Jones) Singleton in Greenwood, Mississippi. He was the eighth of ten children.

In 1937 the family moved to Tullahassee, Oklahoma where he lived the majority of his life. He received his formative education at Carter G. Woodson School and from there he enlisted in the United States Army.

He met Margaret Marshall of Clarksville, Oklahoma and after a brief courtship they married in November of 1926. To this union twelve children were born and raised in Tullahassee.

At the age of 32, James was called into the ministry. He was the shepherd of the flock of United Temple Church-Tullahassee, which he, two of his sons and a nephew rebuilt and they began having services there in 1959. As a bi-vocational pastor he was also employed by Flintco Construction Company. It was his desire to spread the gospel but not be a financial burden on the members of his congregation.

In 1971, Rev. Singleton and Margaret were led to move their family and the church to Tulsa, Oklahoma. He purchased the building at 2818 N. Hartford and grew the congregation with members from Tulsa and Tullahassan’s who had moved to Tulsa. The church’s motto “Where the Gospel is Preached in its Simplicity”, symbolized his delivery of God’s message. He wanted people to know Jesus and to be saved.

Rev. Singleton was awarded several commendations during his ministry. One of which was to receive an Honorary Doctorate Degree bestowed of him by Christian Ministerial Alliance-President W. R. Casey.

Rev. Singleton will be missed for his work in the community and his work for the ongoing of God’s kingdom.

Reverend Singleton will be laid to rest next his wife at Fort Gibson National Cemetery Fort, Gibson Oklahoma.