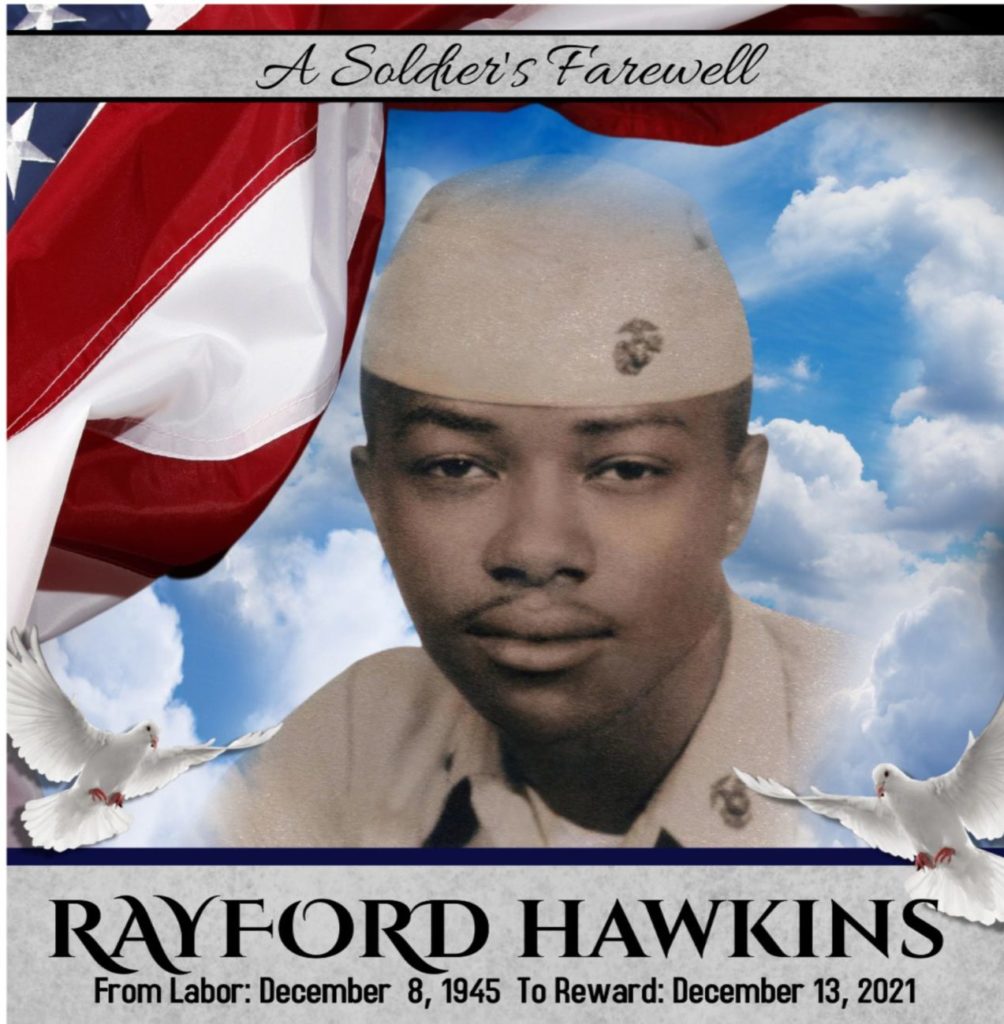 Rayford Hawkins was born to Mary Lee and Raymond Hawkins on December 29, 1940, in Okmulgee, Oklahoma.  Rayford was baptized when he was eight years old, and in his youth was a member of Morris Chapel Baptist Church in Bald Hill.

Rayford attended Long Star Elementary school in Bald Hill, Oklahoma. It was necessary for Rayford and his brother and sister to walk three miles to and from school each day until his dad was able to make arrangements with the county for Rayford and his siblings to ride a bus to and from school. While in elementary school, Rayford was an honor student who excelled in public speaking while participating in the 4-H Club.

Rayford loved music. He was a great singer.  Rayford was also very protective of his sisters as they grew up together.

Daughter Joyce Ann Hawkins (Gillis) was born in 1960.  Rayford also enlisted in the United States Marine Corps in 1960. While in the Marine Corps, Rayford was trained as a sharpshooter and received recognition for this training as well as for good conduct during his service. Rayford was honorably discharged from service in 1964 and returned to Oklahoma to establish a home with daughter Joyce and Joyce’s mother Vivian Hawkins in Tulsa.

During the 1960s, Rayford established himself and provided well for his family, through a strong work ethic and innate business acumen. Always seeking to improve himself, Rayford attended Tulsa Junior college and obtained an Associates Degree. Rayford had several good jobs working for big companies as well as the United States Postal Service. Rayford later retired from the Postal Service.  During his working years, Rayford invested in real estate and worked hard to save money for a rainy day.  After his retirement, Rayford became an Addiction Group Counselor for a local program for youth.

During the 1970s, Rayford remarried and had two stepchildren Dale and Lisa with whom he continued his relationship as stepdad after he and their mother divorced.

In 1992, a son was born who was named Rayford Lorenzo Hawkins. “Little Rayford” has lived with his dad since he was 14 years old.

In 1997, Rayford married Ann Asberry. Ann was a wonderful partner with Rayford, and the two of them combined their resources to live comfortably in their later years. Tragically, Ann passed away within the past two years and Rayford was left to spend his final years without her.

“Little Rayford” became Rayford’s caretaker in Rayford’s final days giving up his job to stay with and care for his dad full time.

Rayford’s daughter Joyce became Rayford’s most trusted confidant and assistant. She and “Little Rayford” worked together to make arrangements for Rayford’s medical care.

Throughout his life, Rayford faced many challenges, obstacles and roadblocks.  Rayford’s faith in God helped him to overcome each of those challenges.

Rayford’s faith in God led him to become a member of World Won for Christ Life Ministries in Tulsa.

Rayford took great pride in his children and grandchildren and very much enjoyed their company.  Although she lives in Kansas City, Joyce spoke by phone to her father every day including his last day on Earth.

Rayford has left his legacy of love with commitment and enthusiasm through his children. His life will continue even though he has passed on to Glory. His intelligence, diligence, independence, assertiveness, business savvy, charisma, laughter, handsome smile, good looks, high self-esteem, determination and faith in God will never die. Even though we will miss him, we thank God for taking him from this world of misery, pain and suffering into his glorious new life of everlasting peace. We love you Dad, Grandfather, Brother, Uncle, Cousin and Friend to many, and will see you in the bye and bye.

Rayford will be greatly missed by his family and friends.

Rayford will be laid to rest at Fort Gibson Military Cemetery.