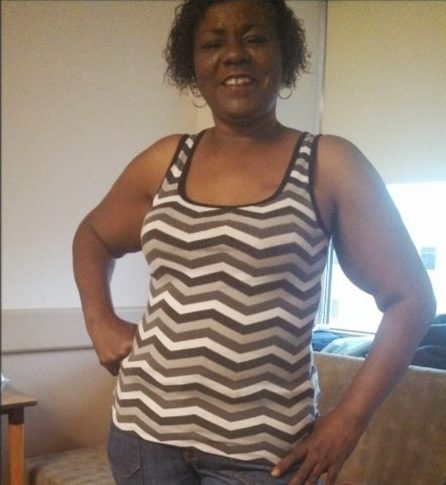 “Celebrating the Life and Honoring the Memory of Portia L. Moore…”

On May 3, 1961, in Kansas City, Missouri a beautiful baby girl was born to Paul Hollowell and Betty Ann Zollar, whom they named Portia Lynette Zollar.  She was one day shy of sharing a special birthday with her cousin Byron who was born just a day before she was.  To her family and close friends, she become affectionately known as “PoPo”.

When she was an infant, her Great Aunt, Florence (Woods) Jordan, went and picked her up from Kansas City, MO and took her back home with her to Buford Colony (located in Sand Springs) where she and her sister Etta (Woods) Cole and her husband Clentis Cole were all instrumental in raising her.  She enjoyed being in the country atmosphere and often reflected on the homemade biscuits her Aunt Etta cooked every morning and would occasionally share stories about playing with her cousins, milking the cows, churning the buttermilk, and feeding the animals.

She attended Sand Springs public schools and did not receive her diploma, but she did go on to obtain her G.E.D. in 1981.  Portia later attended San Francisco State School of Science and through hard work and dedication earned her mortuary license and graduated at the top of her class in “Embalming Science”.

Portia found religion and expressed her faith at an early age while attending Oak Hill Baptist Church in Buford Colony (Sand Springs); where she enjoyed expressing her musical talent.  It was there were the seeds of Christ was planted and although there were times it seemed as if she had lost her way, she would always find herself being drawn back by God’s grace and mercy while having the hymn “Because He Lives” embedded in her heart.

She loved singing praises to our Savior along with serving in the church.  She held many positions serving the Lord including Directing the Choir and becoming Vacation Bible School Director in Sapulpa, OK at Macedonia Baptist Church under the late Rev. R.T. Samuel; which ended up being the highest attended Youth Vacation Bible Study at that time in Sapulpa, OK.

Portia was Saved and Sanctified under New Hope Baptist Church (Tulsa, OK) under the leadership of Pastors Melvin and Sandra Johnson.  A few years before her death she moved her membership to Greater Mt. Carmel Baptist Church (Tulsa, OK), as she expressed, to be near family.  While there, she briefly became a Youth Sunday School Teacher and Mission President and served faithfully until her health began to decline under the leadership of Pastor Michael Jackson, Jr.  She did not allow her sickness to hold her back from sharing the gospel.  She was happy and excited to tell everyone who would listen “about a man named Jesus Christ who had changed her life…”

She was generous to everyone and wanted those around her to know beyond a shadow of a doubt that she loved them.  She enjoyed cooking and feeding her family, friends, church members, and pastors.  She went out of her way to display the love she had for those around her.  If she had 2 pieces of chicken, she was eager and willing to make sure you had one; if she ate, you ate, that was the type of heart she had.  She was also known for buying food for the entire hospital and nursing home staff that took care of her.

Many times, she expressed that she was “Ready” and was not afraid to transition from this life to glory because as she so convincingly, concisely, and confidently would proclaim “I KNOW WHERE I AM GOING!” meaning she was on her way to see Jesus!

She leaves to cherish her memories: