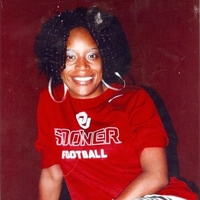 On September 29, 1979 after a long delivery Nakia Ruvell Johnson was welcomed into Janette Johnson and Earnest Maurice Chaplin, Jr. at the Hillcrest Hospital of Tulsa, Oklahoma. She was the first born to both of her parents.

She was baptized at an early age at Antioch Baptist Church under the leadership of Rev. M.C. Potter.

Nakia was an entrepreneur at heart opening Nakia’s Daycare for many years. She later began a caregiver for the elderly. Nakia had a knack for crafting and creativity she often found herself refurbishing furniture. She had a crafty hands. Nakia she loved to have a good time, she would bring life to any party. She also enjoyed styling hair and traveling.

She blessed to successfully become a full-time mother, provider and friend to her six beautiful children, Xavier, Janiqua, Nakiyam Diamond, Roshawn and Treyshaw. She was a great friend to her children in which she loved and adored.