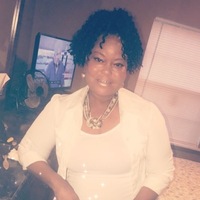 On March 3, 1967 a beautiful baby girl, by the name of Kim Elaine Richardson, was born in Tulsa, Oklahoma to the loving parents of Tyrone and Velma Richardson.

Kim was a happy and joyful child who loved dancing and singing. Kim later gained the nickname “China Doll” because of her full round face and slanted eyes.

Kim attended Tulsa Public Schools and was a graduate of Raymond S. McClain, Class of ’85. She later attended NSU, with her cousin Clark E. Williams. Kim loved hanging out with her family, friends, listening to music and dancing. Kim was a people person and loved giving to her community.

Kim worked at Quality Plating for 20 years. She later decided to give back to her community by starting up her own community center in Tulsa, Oklahoma. Kim also write her own poetry book, “Women of Many Faces,” After struggling with her illness, Kim had to give up something she truly loved. Kim also struggled with the loss of her son, Gable C. Richardson.