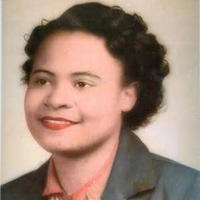 “To everything there is a season and a time to every purpose under the Heaven” Ecclesiastes 3: 1

Edna Mae Alexander lived her life with the philosophy based on
Ecclesiastes 3.

Her “Time to Be Born” was August 9, 1932, in Wetumka, Oklahoma. Her father and mother, William and Ella Mae King were proud parents of ten children. Edna Mae was their second child.

A “Time To Weep” A “Time To Mourn” was when her father, mother, one
brother, Edward “Joe” King and one son, Ezra Alexander Jr. preceded her in death.

Her “Time To Plant” began with her education in Wetumka Schools and she later moved to Tulsa, Oklahoma. At an early age, she acquired the art of cooking and baking. Sunday’s and holidays were a treat with her bountiful, delicious three and four layered cakes. During her working career, Edna worked in the food and
hospitality industry.

Her “Time To Love” began on June 11, 1955 when she gave birth to a son, Robert Eugene King. A few years later, she met Ezra Alexander Sr. and they married on July 18, 1958. Soon after, a wonderful addition to the family came in the birth of a son, Ezra Alexander Jr. Many years later the marriage was dissolved.

Her “Time To Embrace” began when she professed her love for Christ and was baptized. Edna loved going to church and she truly loved the Lord. Hats and heels were her favorites to dress in. She was often recognized by the hat she was
wearing well before you knew it was her. She was a faithful member of Greater Union Baptist Church until her health failed.

A “Time To Gather Stones Together” continued when she transitioned to Beacon Ridge nursing facility. Edna was affectionately known by staff and residents as “Granny.”