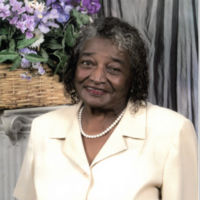 Cleo Marie Asberry began her life’s journey on May 13, 1927 in Haskell, Oklahoma as the fourth child to Joseph & Georgia Ann Asberry.

Cleo graduated from Booker T. Washington High School, Haskell, Ok in 1946. She met and married Willie Sango also of Haskell and from that union seven children were born.

Cleo gave her life at an early age to the Lord. She and her siblings formed a singing quartet known as the “Mt Zion Gospel Singers”. They later changed the name to the “Asberry Singers”. As the lead singer, they had to put her up on chair when she sung so the people could see her. One of Cleo’s favorite songs were ”Tell it.” This became one of their most famous songs along with “Traveling Shoes.”

Cleo worked at Hissom Memorial Center as a Certified Nurse Assistant. She later retired after 30 years of service.

She was a member of the Greater Mount Rose Baptist Church and served faithfully as a Deaconess and was President of the Choir; a task taken with great honor and pride. They could always count on her overseeing the music for programs and events for the Church.

Cleo had favorite sayings, and one in particular spread throughout the world “God’s Got It.”