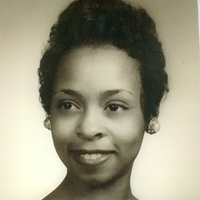 Ruth Mary Gunnells, who was affectionately called “Nanny” by most, was born on September 27, 1940 to Mildred and Wilbert Morris Sr. She attended Tulsa Public Schools and graduated from Booker T. Washington High School in 1958 with the honor of the being named the Queen of the Hornets. She attended Tennessee State University in, Nashville, TN for a time.
Being young and in love, Ruth married her first love, Donald Ray Brown Sr and produced to beautiful sons, Donald Ray Brown Jr. (Poochie) and Mark Brown.

As a lifelong lover of people, Ruth devoted herself to helping others, First by working in the medical field for many years and later transitioning to home health care. She was passionate about her work and loved caring for those placed in her home. Her number one goal in life was to be able to “HELP OTHERS ALONG THE WAY”

Preceding her in death are her paternal and maternal grandparents, her parents, Wilbert and Mildred Morris, her two brothers Wilbert Morris Jr. and Ronald Morris, her brother in law, Willie Adams, her niece Dana Adams and her beloved son, Mark Brown. Ruth leaves to cherish her memory, her oldest son, Donald Ray Brown Jr. and his wife, Sherlena, her two grandsons, Mark Anthony Brown Jr and M’Kai Brown, her great grandchildren Markel Brown, Laila Brown and Kamiran Bell , her sisters, Mattie Adams and her children Gene Adams, Joanna Adams and Gail Adams and Virginia Reed and her children Cecil McBee Jr. and Debbie McBee-Jones , her nieces LaTonya Clay and Edna Morris and a host of loving family and friends.

He healeth the broken in heart, and bindeth up their wounds. Psalm 147:3