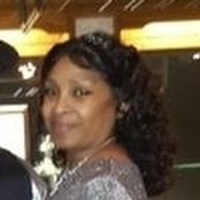 On April 24, 1957, Hurldine “Madear” Mason and Willie Bert Shannon welcomed into this world a beautiful baby girl, Pamela Renee Shannon. Renee, as she was called by her family and friends, grew up in Tulsa, Oklahoma. Later in life her mother, “Madear” met and married Mr. Winford Walton, who became a father to Renee and they shared a special bond.

At an early age, she accepted Christ into her life. Her favorite scripture was the 23rd Psalms. Renee loved the Lord and was blessed with a voice to sing, which she used to praise God and usher in His presence. She was a member of Timothy Baptist Church under the direction of Pastor John C. Gilkey. She later joined New Heights Christian Center under the direction of her brother, Rev T.W. Shannon.

On July 20, 1974, Renee married her former spouse, William Grundy, Jr, and to this union 3 children were born, Moniquo, Sr., William IV and Tamara Grundy. Renee found love again and on April 20, 2010, she gave her hand and heart to Mr. Sedrick Demond Titus. This union was filled with love and adoration.

Her family and NHCC family will remember Renee for her loving, sweet and giving spirit. She volunteered her time and pulled together a lot of events for her church family. She was a blessing to many.

Renee was a clothing connoisseur and a shopper, you would always see her and Sedrick in matching outfits, always looking good. She was a world traveler and a great cook. She made beautiful gift baskets and whatever you like, she would make it special and with love.

Renee’s Legacy of Love will live on through her children and beautiful grandchildren, who affectionately called her “Nae-Nae.” She loved going on family vacations and attending her grandkids birthday parties and special events.

On Wednesday, June 15, 2019, Renee transitioned to Glory, putting on a new body and a new crown. Meeting her at Heaven’s gates will be her parents Hurldine and Winford Walton and Willie Bert Shannon, brother, Coydell Miller, Jr. and her father-in-law, Eddie Wright.

“On Wednesday May 15, 2019 the name of Mrs. Pamela Renee’ Titus of Tulsa, Oklahoma was called to her heavenly home” Funeral services will 10:00am Saturday May 25, 2019 at Metropolitan Baptist Church 1228 West Apache St. Tulsa, Oklahoma.