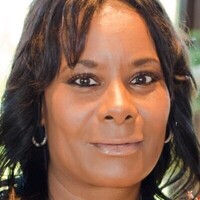 Melanie Venee Carr Woods was born to Donald and Joy Carr on December 18, 1963 in Oklahoma City, OK. She was the third of three children born to this union. Melanie received her early education in Okemah, Oklahoma. She graduated from Boley High School in 1981. She attended Pleasant Hill AME Church at a very young age. She later united with Mount Olive Baptist Church in Sapula, Oklahoma. She earned her Bachelor Degree in Criminal Justice in 1986 from Central State University, known today as OCU. Melanie met Edwin Ashley whom she married in 1983 and to this union, two children were born, Shreeta Ashley and Edwin Ashley Jr. This marriage was dissolved. She later met Kenny Woods and to this union one child was born, Kenny Woods Jr. She was a kind and nurturing mother who cared for her children and provided for all their needs. She not only provided for her own children but also for her nieces, Nicholette Wilson, Latesha Hunt, a nephew, Jamel Carr, and her great niece Gabby Bowen. Melanie greeted the world with a smile. She was fierce and feisty. She provided care for her father, mother and husband even though she was battling her own illness. Melanie loved children and operated her own daycare for 23 years. She closed her day care in 2020 due to the pandemic.

Those who preceded her in death:

Those left to cherish her memories:

Nieces, Nephews, Brother and Sister, Aunts and Uncles and many cousins and Friends