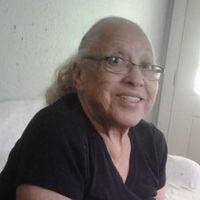 Once upon a time in town named Sapulpa, Oklahoma, the late Jerry Lee Gibbs and his Bride Marie Gibbs gave birth to a little girl on July, 22, 1939 and they gave her the precious name of Marquetta Ann Gibbs. And so her story began, she was the first of 13 children affectionally known as “Baby.” At a young age she accepted Christ at Mount Olive Baptist Church in Sapulpa and later rededicated her life at Emanuel Apostolic in Tulsa, Oklahoma under the direction of Pastor Charles Williams. She became a mother to two handsome sons, soon after she married and had six more children whom she absolutely adored. Throughout her life she was employed with the Williams Company as a Supervisor and later retired from the University of Tulsa as the Supervisor in the Custodial Department. Life of the Party she was, in her early years you could find her at all of the Blues concerts. She was very well known to the late B.B. King, Little Milton and even Ike and Tina Turner who would visit when they came to town. She would dress to the 9’s, you couldn’t find a sharper dresser when she stepped out on the town.

In 1978 she moved on Boston Avenue to which it will never be the same. Because there she became the pillar of the community. In the summer months, you could always find her on the porch with her Natural Light and her Pall Mall Reds giving her cold-hard truth if that’s what you needed. She didn’t believe in sugar coating ANYTHING/NOTHING and she gave you that tough love Redd Foxx-Madea Style. She was a guardian to ALL in the neighborhood and didn’t mind clothing or feeding anyone who was ever in need. Later she met the love of her life Charles Warner who later preceded her in death. After retirement she enjoyed spending time in the kitchen, she enjoyed celebrating birthdays with her family especially her grandchildren whom she absolutely loved. She looked forward to Saturday mornings where she would spend the entire day at garage sales. Her favorite holiday was Christmas, she looked forward to decorating the entire house and yard while playing the blues in the background.