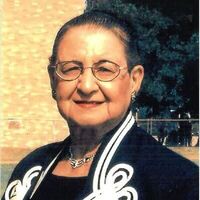 Katherine, “Kat” as she was affectionately called by family, was born in Grayson, OK on October 26, 1928, to Adrian and Eula Goudeau. She was one of ten children. Growing up, Katherine was known by many of the ladies for doing hair. With four girls, granddaughters and even great granddaughters, she’s done a lot of hair-pressing! In her early life, she met and married Bob Price Jones, where the two moved to Tulsa and began their life together. To this union, six children were born. Katherine took pride in being a homemaker. Even during the time that she worked as a housekeeper at Sheraton Hotel, she was diligent and hard-working in both her home life and work life for well over 20 years until retirement. The loving home she created not only fed her children, grandkids and great grandkids, but other friends and family as well — Sunday after Sunday, holiday after holiday. In later years, though her vision began to fail, she still continued going to the Senior Center until Covid closed it’s doors. She was not alone on Sunday, February 14th, when the Lord called his beautiful angel home. Even near her end, she let her family know that she loved them. Katherine is preceded in death by her parents, her husband, seven siblings (Teresa, Louise, Florence, Mary, Celestine, Curtis and Freeman); one nephew David (Bobo) Williams, and one grandson, Arville L. (LeeLee) Jordan, Jr. To live out her legacy, she leaves behind her children: Clifford Jones, Robert (Sheila) Jones, Alberta (Gene) Harrison, Linda (Jack) Johnson, Janet (Kent) Grayson and Lisa (Gene) Valdez; nine grandchildren, 10 great grandchildren, two sisters, Betty Henderson and Shirley Edwards, both of OK City, OK. She will be greatly missed by a host of nieces, nephews and other family members and friends.

A graveside service will be held on Monday, February 21, 11:00am, at Green Acres Memorial Gardens.