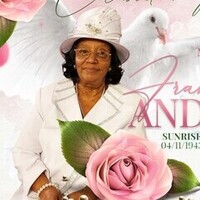 Frankie Lu Anderson was born April 11, 1943 to Mable Lee Coleman and Charley Brown in Claremore, Ok. She was the 4th child born to this union. She received her Elementary and Junior High education at Lincoln School and proudly graduated from Claremore High School where she earned the title of Miss Music. After high school she graduated from Langston University and also joined Alpha Kappa Alpha Sorority, Incorporated.

On June 22, 1965 Frankie married the love of her life Kenneth Lee Anderson (54 Years). Ten children were born to this union, seven were graciously, though reluctantly, given back to God shortly after their births allowing their second to none son (Keith Lonnel), seventh born (Joseph Michael), and tenth child (Faith Elizabeth) to be raised in a loving home influenced by God, love, music, and community service.

Frankie came to know the lord as her Savior over 60 years ago as a member of Mt. Zion Baptist Church in Claremore, OK. She served as missionary and Dean of Charles Harrison Mason Bible College headquartered in Tulsa at Northside Church of God in Christ (COGIC) under the leadership of Oklahoma North West (OKNW) Jurisdiction’s 1st Administrative Assistant Carl Prather and State Supervisor Ruth Prather. She received her call to ministry under this leadership and served as District Missionary under Superintendent Wesley Gamble Sr. (Tulsa Central District) and Superintendent Millard Jones (Sand Springs District). Kenneth and Frankie were appointed as Pastor and Wife of Emmanuel COGIC in Pawnee, OK serving the church and community for over 15 years.

Her life as a teacher began with Tulsa Public Schools. Her career included over 40 years of teaching with an emphasis in typing and math at Monroe, Nimitz, and Gilcrease Middle Schools. Additionally, she expanded her education with an emphasis in Math at Tulsa University. She went on to develop curriculum in Adult Education allowing students to earn their GED through Charles Harrison Mason Bible College. She was the first dean of the C.H. Mason System of Bible College in Oklahoma and is the current Dean of the C.H. Mason Jurisdictional Institute.

For years Frankie lived a joyous life serving the Lord, her husband, and her children. She is most remembered for her kindness, wisdom, and generosity to all. She is our Mother.