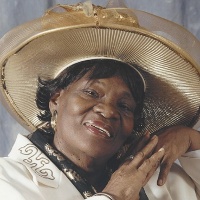 I have fought the good fight, I have finished the race, I have kept the faith. Now there is in store for me the crown of righteousness, which the Lord, the righteous Judge, will award to me on that day — and not only to me, but also to all who have longed for his appearing.

On October 1, 1934, a baby girl was born to Haskell and Estrella Jackson in Snake Creek, Oklahoma. They would affectionately name her Elsie Lee Jackson. At an early, the family relocated to Sapulpa, Oklahoma where she attended school and graduated from Booker T. Washington High School, Sapulpa.

Uniting with the King Solomon Baptist Church, Elsie was a faithful member. While attending King Solomon BC, she met and married Mr. Earl Lacy who precedes her in death.

She moved to Wichita, Kansas with her siblings later to return to Sapulpa to care for her ailing father. After the passing of her father, Elsie made the decision to move to Tulsa to be closer to her children. Having an unshakable faith in God, Elsie’s new church home in Tulsa became Shiloh Baptist Church under the direction of Melvin L. Bailey Sr. and lastly, Reverend Vernell Bell. She was a faithful member for over 30 years working in several different ministries such as Church Choir, Prayer Warriors and Women’s Missionary Society and feeding of the Homeless. To know her was to love her and she reciprocated it back. Family was everything to her but her greatest joy was having weekly bible study in her home with her grandchildren.Laying a strong foundation in Christ.

She loved life and some of her simple pleasures were chocolate chip cookies and drinking Pepsi. Her hobbies included going to the nail salon, shopping and cooking. Elsie was a fashionista, she always prided herself in the latest fashions and she wore a hat to match every “Sunday’s Best” ensemble.

Elsie is preceded in death by her parents, Haskell and Estrella Jackson; husband, Earl Lacy; five siblings, one daughter, two grandsons. Elsie was the last surviving siblings; they are all together again in the presence of God, this is not good — bye just Until Then.