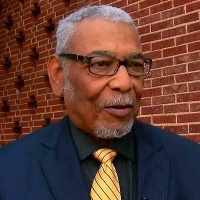 Expressions of a Blessed Life

On November 11, 1937, Mamon Patterson and her husband Rosea Snoddy welcomed into the world the oldest of their two sons, William Rosea Snoddy. After his father passed, his mother remarried and William gained more brothers and sisters. They became a blended family full of love.

William was reared in Claremore, Oklahoma and attended Lincoln schools, which was an all-black school system. William received a great education. As his senior year approached, Claremore underwent desegregation which meant William would graduate from Claremore High School. Graduating in the Class of 1956, William was the first African American male to graduate from this high school. After graduation, he signed a letter of intent with the University of Oklahoma. The coaches and recruiters were ready for a black athlete; however; the University as a whole was not and they ran William out of Norman with guns drawn. Knowing that education was the key to success, William matriculated at Langston University where he earned a degree in Biology. While at Langston he gained a brotherhood for life, he and his brother Billy Joe Snoddy both pledged and became men of the Alpha Phi Alpha Fraternity. They set the example for all the Snoddy men to follow.

After graduating from Langston, William was employed with American Airlines in the Engineering Lab. This is the only company he ever worked; changing only the desk in which he sat. He started sitting in the open; however; he ended his career by having his own office. William ended his career as the only African American in management in the Non Metal Department. He was very instrumental in the creation of three patents that American Airlines now hold. If you travel by air you will see his work. The patents are as follows (1970) Airplane Door Seals, (1980) Wing De-Icer and Flame Retardant Seats.

William married his high school girlfriend, Mary Alice Brown and to this union five children were born, William Jr., Michael, Rolanda, Martin and Lilyan (Tobi). Although this marriage was dissolved, Mary Alice and William remained friends until his death. William did not give up on love, in 2003, he married Naomi Williams. She was his best friend and loving companion for over forty years. Not only did he marry Naomi but he loved her three children, Billy Don, Tracey and Barry, they became a happy blended family. To this union, one child was born, Pamela.

William was a member of Vernon AME for over 50 years. He loved his church and he collected a few titles over the years that included: Man of the year, Member of the year, Trustee, Steward and choir member.

William loves to take pictures. He always kept a camera in his hand, sometimeshe had two! He loved gadgets, anything with a button intrigued him. But nothing could compare to his love for shopping. On his worst day shopping he could out shop any two good women on their best day. When you think of William, think of the word patriarch and all that it means. William was the epitome of the word. Everyone looked up to him, received advice from him, he set the bar for the men to follow and he loved everyone in his family. He believed and lived — Family Love.