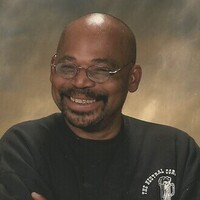 Tracy Allen Crawford was the oldest of 7 children born Feb. 16, 1965 to Earrie (Crawford) Cotton and James Cotton in Bristow, OK. His education began in Bristow Public Schools and later continued in Oklahoma City public schools where he graduated from Northeast High School. Tracy was baptized at Good Shepherd Baptist Church in OKC, and much later in life he joined Paradise Baptist Church in Tulsa. He was called home on August 13, 2020.

In adulthood, Tracy worked at Ford Glass Factory, both in Tulsa and in Detroit. Later he worked for Thomas Cadillac, and still later he obtained his CDL and became an over-the-road truck driver. He held various other jobs before becoming disabled.

Tracy married Leisa Stallworth, and to this union 2 children, Tracy, Jr. and Virginia, were born. From a later relationship he was blessed with daughters Tiffany and Andria.

Tracy took great pride in being the grandfather of 21 precious little ones. He loved to travel. He became a passable shade tree mechanic and could be called upon for much car repair. Many knew him to be goofy and corny, but we all knew him to be a very lovable and loving person.