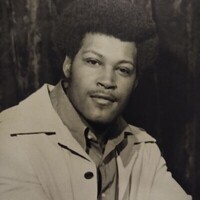 “I am at peace; my soul is at rest. There is no need for tears, for with your love, I was blessed for all my years.”

Tommy Edward Wilson was born on June 27, 1951, to the parents of George Edward (who proceeded him in death) and Mable LeEster Wilson. He was born in California and raised in Tulsa, OK.

He was a scholar student at Carver Middle School and a graduate of Booker T. Washington, both in Tulsa, OK.

His melodic voice was music to the ears! Indeed, he was a dynamic
spiritual singer and piano player. As a member of his church, he also
became the Assistant Director of Music. With such an inspirational
presence, he received several invitations to sing and play piano at many events and functions.

In 1970, Tommy joined Margaret Roberts in holy matrimony. From this union, 3 beautiful blessings were added to their family.

Tom was blessed with much wisdom and a humble heart. He was a
friendly soul, who would always take the time out to discuss the Bible and advised- “thus said the Lord”. His shoulders were strong and carried heavy loads. As a problem solver, he would try to direct you in the
right direction.