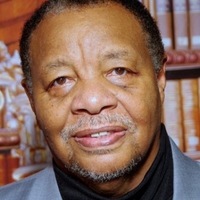 Rufurd L. Henderson, a leading civil rights pioneer for many decades, died Sunday, October 13, 2019 at the age of 72, confirmed by family and friends.

Ruford Lee Henderson was born on February 14, 1947 in Rock Hill, South Carolina to Martha Lee Henderson. He was the eldest of his 2 siblings which he wore with pride. Ruford moved to New York at an early age where he graduated from Hempstead High and went on to graduate from Nassau Community College as a Computer Programmer. He soon began his career at American Airlines which led him to Tulsa, OK in 1974 with a host of corporate friends and family that joined in the transition.

He met and married Shirley Baker in 1965, and to this union three children were born, Ruford Lee Henderson, Jr. April Henderson and Andreer Henderson. After 25 years of marriage this union was later dissolved.

He was an amazing father and father figure for all of the neighborhood kids. He taught them different skills from karate, football, basketball, leadership, entrepreneurship, public speaking, and important community activism’s. He was known to take on anybody giving them a safe haven at his residence whether young or old. To him, everyone was his baby girl or baby boy.

Ruford had a passion for helping his community, leading him to open up several small businesses to help others through the Equal Opportunity for Economic Development.

He served the community in the cause of equality and justice, worked alongside many of Tulsa most influential leaders including current and past mayors, councilmen and women, educators and other community activist.

Ruford joined multiple civil rights and community organizations in which he became one of Tulsa’s most known leaders, mentor, and activist. His true passion was helping anyone he in contact with especially the youth. He vowed that he would never let a child go without. Even in the final weeks of life — a time when anyone else would have enjoyed their well-earned rest, Ruford continued his fight to make our community a more open and inclusive place for people, especially youth, of every race, gender, background and faith.

Mr. Henderson was a fearless leader and a fighter for the protection and rights of people, especially youth, in the Tulsa community. Some of Ruford’s other accomplishments include serving as Vice President of the Tulsa NAACP; Legal Regress Chair for the State of Oklahoma NAACP; Co-founder of the 100 Black Men of Tulsa; District 1 Advisory Board member for Councilor Joe Williams; Community Based Policing Advisory Committee member for TPD Chief Drew Diamond; Co-founder, Committee for Equal Opportunity; Tulsa Public Schools McLain Advisory Committee member; Co-founder, Citizens United for a Better Educational System (CUBES).

Henderson was a dynamic man with a resilient spirit, who was a role model for men, women and children of all faiths, races and perspectives. For him, it wasn’t about the many years of his life, but what he did with them.

Henderson’s tireless work of equality and justice continues on throughout this community and through his legacy.

He is preceded in death by his mother, Martha Henderson and youngest brother, Earl Henderson.

We Will Miss You Baby Boy, Love Your Grandchildren