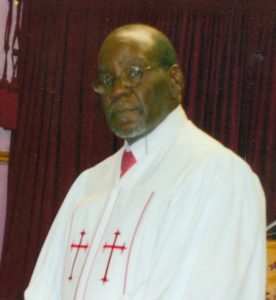 Oscar Dillinger Jackson began his journey 78 years ago as the sixth of eight children born to Minerva (Haynes) and O.D. Jackson born on June 12, 1943. Oscar D, as he was fondly called by his siblings, family, and friends, grew up in the South Haven community before it was annexed to Tulsa in the west part of the city. Oscar attended South Haven Elementary, Clinton junior High, and Daniel Webster High Schools.

Receiving his foundation in the Baptist faith at the Mount Olive Baptist Church in South Haven, Oscar would often relate how he
received the lord into his heart as a “barefoot nappy headed boy” as he walked down the Caney railroad tracks.

Entering the army at the age of 17 he received his GED through the U.S. Armed Forces Institute and went on to reach the ranks of E6 Staff Sergeant Ranger in the 75th Infantry Regiment during the Vietnam War and received the following commendations: Good
Conduct Medal, National Defense Service Medal, the Purple Heart, the Bronze Star, Vietnam Service Medal, and the Sharpshooter (Rifle M-14) Expert Infantry Badge.

Returning to Tulsa, Oscar married Iva Jean Ladd and to this union were born son Paul Kristn, and a daughter Laura Kay Cammille.

Oscar accepted his call to the ministry while serving overseas and in 1968 moved his family to attend Oklahoma Baptist University in
Shawnee, Oklahoma to receive training in the ministry. Later he honored his call to the ministry under the direction of H.D. Morris and was ordained in 1977 and went on to preach at several churches until accepting the call to become Senior Pastor at the Mount Olive Baptist Church South Haven. His preaching was sharp, to the point, forceful, full of power and could pack a full sermon in 7 minutes and not miss a beat. He would often preach himself happy. He served as pastor there for some 30 years before retiring due to his health. He continued his studies at Tulsa Junior College finishing his bachelor’s degree in biblical studies from Andersonville
Theological Seminary and received his Master of Arts in Theological Studies from Newburgh Seminary in 2006. He was in pursuit of his PhD prior to a decline in his health.

Needing to provide for his family, Oscar was employed with the Tulsa Police Department as a street officer for about 6 years and
subsequently as a claims adjuster and field auditor for the Oklahoma Employment Security Commission (OESC) before retiring after some 38 years. He served briefly as a counselor at Gilcrease Junior High School and related many fond memories of the young people he encouraged.

One of his lifelong desires was to teach and mentor young ministers and preachers in the rudiments of preaching. Seeing a need that the word of God was correctly expounded, he offered his services in that capacity as many were unable to afford higher education and would not be able to afford the knowledge and experience needed to preach the word effectively.

He was a gun enthusiast. His favorite book of the Bible was Romans, and he loved music. Some of his favorite artists were, Curtis Mayfield, The Temptations, Grover Washington, and many others.

Oscar was a loving husband, father, grandfather, brother and uncle whose legacy will live on in the hearts he touched. Although we will deeply miss his presence here on earth we rejoice in knowing he has now received his heavenly eternal resting place.