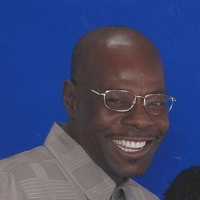 Michael G. Warner was born in Muskogee, OK, April 28, 1948 to Paul and Dorothy Warner as their 5th and youngest child. “Blue” as he was lovingly known by most, received his education in the Muskogee Public School system.

After High School he enlisted into the US Army where he served in Colorado, Alaska and in the Vietnam War. After completion of his service Michael received an honorable discharge. He was a skilled welder and an Honor guard. After leaving the Army, he returned to Muskogee and later moved to Tulsa.

In addition to being a skilled roofer, he was employed with St. Francis Hospital for several years until a severe back injury required him to retire from his employment.

Blue met Karen in 2000 not knowing that they would become more than friends in 2007. Blue found his wife and on May 13, 2009 they were joined in holy matrimony. Michael was blessed with two sons, Adrian and Sir Michael. He also cared for Aundrey and raised him as his own; Blue also helped raise nine stepchildren who loved him as a father.

Accepting Christ as his Lord and Savior, Blue was baptized at North Peoria Church of Christ but then regularly attended City of Refuge Church under Kenneth W. Brooks until his health began to fail him.

He loved fishing, gathering up pecans and wild onions to lovingly share with others. Blue loved being outdoors. And he loved his family and friends.

On Tuesday November 5, 2019 his spirit took flight. Family that Blue went to greet once again are his parents, Paul and Dorothy Warner; a very special aunt, Gennie Goldsmith; sister, Dorothy Daniels and his brother, Henry Warner.

Leaving behind in God’s care…

His wife; Karen Warner of the home; sons, Adrian Paul Warner and Sir Michael Warner and Aundrey Nears all of Tulsa, OK; brother; Paul (Tonie), sister; Ellicious, twelve step-children, a special niece, Angelia Cherry; along with his grandchildren and great-grandchildren and a loving host of nieces, nephews and additional family and friends.