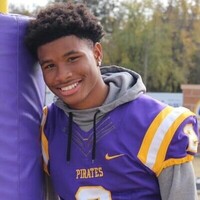 Marvin Kelley Mc Coy III was born on January 14, 2001 in Tulsa, Oklahoma to Marvin Mc Coy II and Rhonda Johnson. He lived in Tulsa, and attended elementary in Tulsa Public Schools system. During Marvin’s 6th and 7th grade he attended Union Public Schools. He later moved to Bristow where he continued his education from 8th grade through High School. Marvin earned his Diploma at Bristow High School.

Marvin played basketball and soccer for a couple of years, but football and track were his passion. He excelled in Bristow, winning the Class 4A State Championship in track two years in a row. After graduating high school, Marvin attended Langston University for a short time.

Marvin made many friends in Bristow that were more like family. He was well known for being the goofball, life of the party, always playing, and having a good time. Marvin had the most beautiful smile and an outgoing spirit.

He is preceded in death by his Great Grandmother, Doyce Pitre, his Uncle, Ronald Bruton, and Aunt Addie Barnes.