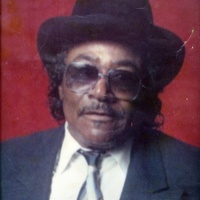 John was born on May 7, 1934 in Inola, Oklahoma to Bennie Haney and Ardalia Cotton.

John always loved the Lord and accepted Christ at an early age under the pastoral care of Elder Carl Prather. He was an active member of Love Tabernacle Church until his health started to fail.

John was the apple of his mother’s eye. He was such a generous man. He was never idle, he was busy at all times. He loved working. As John became a young man, people started to refer to him as “Po P” and as time progressed he became known as “JP”.

As a young man JP worked for Harold Ash Asphalt. He worked for this company for 25 years. During this time he met and married his first wife, Barbara James. He and Barbara were the proud parents of two sons. In 1954, John married his second wife, Billie Jean Walker, to this union eight children were born. JP was a Dad to his children, family members and others. If you needed his help he was there, all you needed to do was ask.

JP later went to work for Forsman Asphalt. He worked for Forsman for over 27 years until his retirement in 2004. He was known for being a hard worker and that is how many people will remember him.