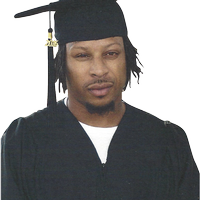 Trust in the Lord with all your heart

and lean not on your own understanding;

in all your ways submit to him,

and he will make your paths straight. Proverbs 3:5-6

Elza was educated in Tulsa Public Schools where he attended Burroughs Elementary, Roosevelt Elementary, Thoreau Demonstration Academy and Central High School. Elza was a very athletic he enjoyed playing basketball, football, Tyquan-do under the late, Marvin Blades, Sr. His favorite player of all time was Alan Iverson whom he tried to model as he played basketball and he was a die-hard fan of the Dallas Cowboys. At an early age Elza enjoyed public speaking, he was a recipient of the Dr. Martin Luther King, Jr. “I HAVE A DREAM” oratorical competition where he received trophies and prizes. Elza was determined to receive his high school diploma and in 2016, his goal was accomplished.

He accepted the Lord Jesus Christ as his personal Savior at an early age. Elza was a family oriented man. He was a loving, Father, Son, Brother and Friend and this love was exemplified throughout his lifetime.

He was blessed with two beautiful daughters, Unique and NiYelli Riley. They were his pride and joy.

Elza was the life of the party. He always had a way of making people laugh and just be happy. Elva had a love for music from his youth that aspired his one day to own record label.

On January 15, 2019, Elza answered a call the be with the Lord and Savior and claimed his space in his mansion. Preceding him in death are his grandparents, Roma Hishaw, Paul Riley and Doug Owens

Please don’t say I gave up, just say that I gave in,
Don’t Say I lost the battle,
For it was God’s war to lose or win;
Please don’t say how good I was, but say I did my best.
Just say I tried to do what’s right,
to give the most I could, not less;
Please don’t give me wings or halos, that’s for God to do;
I want no more than I deserve, no extra, just my due.
Please don’t give me flowers or talk in real hushed tones.
Don’t be concerned about me now,
I’m well with God, I’ve made it home.
Don’t talk about what could have been, it’s over and it’s done.
Just see to all my family’s needs. Especially my little ones.
When you draw a picture of me, don’t draw me a saint.
I’ve done some good, I’ve done some wrong,
So use all the colors you can paint.
Not just the bright and light tones, use some gray and dark;
In fact don’t put me down on canvas, paint me in your heart.
Remember all the good times remember all the bad;
For life is full of many things, some happy and some sad
But if you must do something, then I have one request.
Forgive me for any wrong I’ve done,
and with the love that’s left,
Thank God of my soul’s resting,
Thank God for I’ve been blessed.
Thank God for all who loved me,
Praise God who loves me BEST!