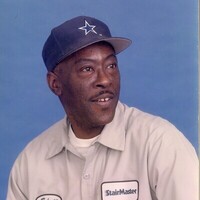 The family all called Edgar “Sonny” but to his friends, he was affectionately known as “Rat” or “George.”

In 1948, the Allen family moved to Tulsa from Okmulgee, Oklahoma, where Edgar was born. He attended Tulsa Public Schools, most notably Booker T. Washington. He attended Trade School and became a machinist. Edgar worked for Sperry Rand for a while and was later hired on at Nelson Electric where he spent 20 years until its closing. He then worked for Stairmaster for 10 years until his heath failed.

Edgar was a devoted family man, a loyal son, brother, uncle and friend.

In 1975, he met and fell in love with Yevette Severs and in 1980 they solidified their union in marriage which lasted until his death, 40 years later.

Edgar leaves to cherish his memory: his wife, Yevette of the home; 3 sister-in-laws: Johnnie Norman, Yevonne Thaller and Laverne Conley, who all doted on him; great-grandchildren: Codi Mason, Jordan Siples, Aaleiyah Siples and Gavin Siples; along with a host of a nieces, nephews, cousins and friends.

He will be missed by all.