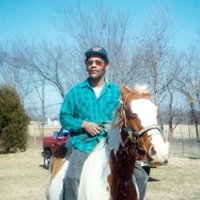 “On Saturday, June 1, 2019, the lights of Heaven shown a little brighter as Mr. David Crowley passed from our world.”

On April 15, 1956, a handsome boy was chosen to be gifted to Ardie Mae Armstead-Brantley and Bill Brantley in Los Angeles, CA. They named him David Alex Brantley. This was an exciting time in their lives. After some time, Ardie moved to Colorado where she met and married Lester Crowley who adopted David and his siblings.

Growing up, David and his siblings had a wonderful childhood. David loved the swing set in the family yard, swimming, playing pool, travelling, and especially helping his mom in the garden.

David completed his formal primary education through Denver Public Schools. He later went on to receive his GED and heavy machinery certificate from Job Corps. He worked as a mechanic until early retirement. David had many friendships and relationships over the years that were genuine and cherished. People who really knew David, his family and friends, all called him Red. He was often described as a little blunt at time. He didn’t take any mess and when desirable, was funny to most!

During this life’s journey, David was blessed and highly favored when he met the love of his life, Juanita Crowley. Juanita and David were together for 43 years of which 39 of the them, they were married. To this union, David and Juanita had 3 children of their own but over the years gained many, many more.

If David were here today, he’d say to Juanita and kids: “I know it’s hard to accept that I have transcended. Thank about all the good, fun, and crazy times we shared over the years. It’s ok to shed a few tears but don’t you drown, you know that’s is not what I’d want. Juanita, be strong. Sister Kay, take care of yourself. To my children, continue to grow and just be you. To my grandkids, make me proud cause I’m still watching you. I love you all and never forget that!”

After 63 years on this side of eternity, the Father opened my exit door so I could return home to Him. Davis may have transcended young but don’t worry! David is preceded in death and met at those Pearly Gates by his mother: Ardie and father: Bill; stepfather: Lester Crowley; brothers: Ivan, Joey, James; sisters: Martha, Sharon, Lyn, and Joanne; aunt: Maxine; uncle: Karl; cousins: Langston and Leroy; nephew: Butchy; and a few other family and friends who also welcomed him home to the arms of the Father.