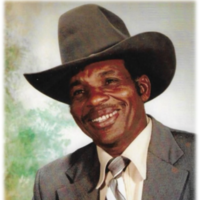 On September 10, 1922, Charlie Moore was born in Sasakwa, Oklahoma to Adeline and Lee Moore. By all accounts, he was a loving son and an even better brother. Charlie was one of 11 children and took his responsibility to his sisters and brothers seriously. He was known to be dependable and steadfast in his dedication to his family. He was preceded in death by his parents, one son Gary and all but three siblings.

After school, Charlie enlisted in the United States Marine Corp, proudly serving as a Private First Class in in World War II. Even as late as his 98th birthday dinner, he would share stories of his time in the Corps. Charlie would describe a very segregated Corps, however through his even temper and solid work ethic, he was able to be an agent of peace within his unit. Private First Class, Charlie Moore was honorably discharged from the United States Marine Corps on December 31, 1945.

Charlie lived his life being as a dedicated Christian, Husband, Brother, Father, Grandfather and Uncle. He was always full of love and laughter and was committed to helping anyone in need. His megawatt smile would light the darkest room and his strong hands would always be extended to anyone that wanted help. He was an amazing father and has left his children and grandchildren a roadmap to live a life full of purpose and honor. Charlie Moore has been a cornerstone in enriching and guiding all who knew and loved him. He served as a Deacon at Gethsemane Baptist Church, under Dr. W.T. Lauderdale. Additionally, Charlie proudly served as the Superintendent of Sunday School for many years.

On July 6, 2007, Charlie married Verdie Mae Brown. Their love has been and will continue to be a shining light to all. The dedication and commitment they have to one another is a living testimony to the kind of love God desires for all mankind. They shared 13 wonderful years together and Mrs. Moore stood by his side as he transitioned into the arms of our Lord and Savior.

Charlie has led an amazing life and it is not possible to condense 98 years into a one-page bulletin. Nor can his life be summed up in 30 seconds of quiet reading. Just remember it doesn’t matter if you called him Uncle, Brother, PaPa, Deacon or just Charlie he loved you. He embodied kindness, valor and wisdom. He will always be remembered for demonstrating to us his core belief, which was, “Do unto others as you would have them do unto you.” He would say, “It don’t cost you nothing to be good to people and treat them right.”

To celebrate his life and legacy, he leaves behind his wife Verdie, son Edgar and daughter Nickole.

Additionally, he leaves two sisters Roxie and Redell and his brother Napoleon. The honorary pallbearers are his grandsons and his granddaughters include, Lynn Moore, Ashlee Wilson, Simone Moore. There are a host of great grandchildren, nieces, nephews and cousins that will carry on his legacy of love and compassion.