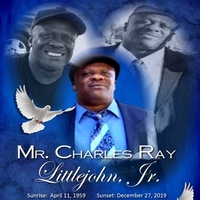 On April 11, 1959, a beautiful spring day, Mary Francis Littlejohn and Willie Blakeley welcomed into the world a handsome baby boy born at Moton Hospital in Tulsa, Oklahoma. They would name Charles Ray Littlejohn. He would be the only child born to this union; however, he would be the fourth child of eleven siblings.

Charles met and fell in love with Rhonda Fox in 1981. To this union three children were born, Marlene Littlejohn, Eboni Littlejohn and Etoile Littlejohn. This marriage would last for nineteen years. He was later blessed with another beautiful daughter, Angel Matthews.

Cooking was his life and he did it well. Charles was a specialty chef. He was gainfully employed with Tulsa’s iconic Nelson’s Buffeteria. Being a lifetime chef, he also worked for Phil’s Diner and St. Francis Hospital. If you were hungry, Charles would feed you, homeless and all. Food was his passion.

People gave Charles a couple of nicknames, “Brother Eyes” and “Charlie Brown” and he would affectionately answer to both.

Charlie Brown had several hobbies. Singing old school music and gospel songs were his favorite hobbies. Reading was fundamental to him and he could read a newspaper from front to back without exception.

During the height of Skateland, you could catch him roller-skating. Skating was one of his most cherished memories. As an avid movie watcher, he kept pace with all the latest movies releases. On the small screen, he loved to watch Steve Harvey and Family Feud. Talking politics with his brothers was a way to get an argument started and then have a laugh. He loved all sports but enjoyed boxing in his youth.

In the early morning of December 27, 2019, God was ready for Charles to receive his wings. Meeting him at the gates of Heaven are his parents, Mary Frances Littlejohn and Willie Blakeley; maternal grandmother, Rosie Littlejohn, daughters, Marlene Littlejohn and Eboni Littlejohn; a brother, Jimmie Johnson.