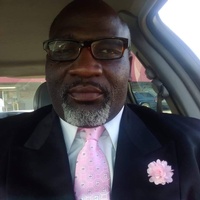 Charles Fitzgerald Evans was born to Robert Evans, Sr. and Nolene Manuel on January 16, 1964 in Tulsa, Oklahoma. He was the eighth child shared to this union.

He attended Tulsa Public Schools Sam Houston, Gilcrease Middle School and Booker T. Washington with the Class of 1984. Charles was good with his hands and electronics there was nothing he could not tinker with and figure out. He later attended the Oklahoma Baptist University in Shawnee, Oklahoma earning an Associate’s Degree in Theology. Charles was a self motivated person and entrepreneur owning By His Stripes painting company and Evans Collection Agency. He also found gainful employment at Lowe’s, Million Dollar Sounds and lastly, People Ready Labor Company as a general laborer.

Charles accepted the Lord as His Lord at an early age. Although Charles had experienced some valleys in his life, he never gave up on the will of the Father. Charles later became an ordained minister spreading the Good News wherever he went. In 2016 he became an Assistant Minister at Church of the Living God Temple #355 of Oklahoma City, Oklahoma under the leadership of Elder Dr. Elmer Gabriel, Jr. Charles was a devoted member and servant. His ministerial duties consisted of but was not limited to the Audio/Video Ministry, Transportation Ministry, Minister for Sunday Evening Service, Assistant to the Youth Department and a Sunday School Teacher. His service was limitless when it came to serving the Lord and his church.

On Monday, November 26, 2018, Charles answered a call to be with the Lord and Savior Jesus Christ. He was preceded in death by his parents, Robert Evans, Sr. and Nolene Palmer; infant son, Robert C. Evans; brother, Daniel Graham and sisters, Charlotte Verner – Rudd.