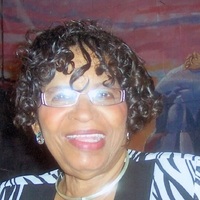 Servant of the Lord and Minister of Music

No first name graced the birth certificate of the 14th child, a daughter, born on August 24, 1928, to George and Sarah Glazier. They called her Lucille. To many of her nieces and nephews who were her peers, she was simply known as “Tuga” (short for “Sugar”), which she firmly put her foot down in high school that they stop calling her that and only call her Lucille. She was raised as a sister with her 2 nephews (Johnnie B. and Winston) after her older sister, Phelma, died. Lucille Maurine Glazier grew up in church and was a long-time member of Mt. Calvary Baptist Church, where she accepted Jesus Christ as her Lord and Saviour.

She attended Muskogee, Oklahoma, public schools and graduated from Manual Training High School. Upon completion of High School, she married Clarence James Crutcher, Jr. where 3 beautiful daughters, DeArnetta, Doris, and Brenda blessed that union. She continued her education at Muskogee Jr. College, Manual Training Branch, graduating in May, 1955. Encouragement and support from her parents and 2 special older sisters, Sarah Elizabeth and Alberta, allowed Lucille to pursue her studies full time. These same 2 sisters shared the responsibilities of raising her daughters while she studied full time. Lucille excelled by expanding her musical talents to include band and orchestra instruments, voice, classical piano, and choir direction. During her Langston tenure Lucille was a member of the Langston concert choirs under the direction of Dr. Anderson. This membership afforded her the opportunity to tour many cities throughout the United States. She was initiated into Langston University’s Alpha Zeta Chapter of Alpha Kappa Alpha Sorority. Inc. December, 1956. Lucille received her undergraduate degree in Music Education from Langston University May, 1958.

After graduating, she moved to Tulsa, Oklahoma, with her daughters. While teaching full time and raising her daughters as a single mom, she was motivated to begin graduate studies to become the best that she could be as an educator. She received her Masters’ Degree from Northeastern State University August 1963.

Lucille stayed true to God’s gift to minister in music as a pianist, organist, choir director, and Minister of Music for over 70 years. Her gift and passion for music was quite evident at a very early age. She played for her first church choir (St. John Baptist, Gibson Station, Oklahoma) at the age of 12. Soon she was playing for various community churches for 50 cents per Sunday. She worked diligently in Mt. Carmel Bapt. Church as Minister of Music, Young Adult Sunday School teacher and WMU study chairman. Her expertise extended throughout the District State and National work. She was the Minister of Music of the Collate District Congress, Pianist for the Southwest Regional of the Progressive National Convention, and she was also Assistant Dean of the Progressive National Baptist Congress of Christian Education.

“Mother Dear” shortened to “Mother” was her handle at home. Her daughters knew there was no higher priority than attending and serving in church no matter how old you got or where you lived. “Find you a Church as soon as you get there!” was her mantra. She made us to know that there was no other option but to “Finish College so that you can support yourself in jobs that will pay the highest rate for a job well done.” We knew the goal was to be self-dependent, willing to serve, willing to be used by God in any way and any place our strengths and talents would allow. Her love was never doubted, for she did what she could to make sure there was food on the table and a house over our heads. “Bravo, Mother Dear!” The daughters had to share their mother, for she gave shelter, love, and encouragement to many other children who became like sisters and brothers.

As wife to the late Rev. E. Edward Holley, they teamed up and put together choirs of all ages to tour and travel around the United States and Canada. She also directed a small group of five singers who toured with her choirs spreading the gospel in music.

She served as Minister of Music at St. John Baptist Church, Greater Mt. Carmel Baptist Church, and Star of Bethlehem Baptist Church prior to her service at the Mt. Zion Baptist Church, Claremore, OK.. Under her leadership many of her choirs have traveled to Florida, Washington, D.C., Missouri, Indiana, California, Michigan, and Canada, just to spotlight a few.

Lucille was not only passionate about music but she was also passionate about education. She started teaching at Carver Jr. High School in 1960. In her professional life as an English Teacher, Guidance Counselor, and Assistant Principal, she always found ways to incorporate her love for music with her passion for teaching children in the Tulsa Public Schools at Carver, Gilcrease, and Hamilton Middle Schools, by directing musical programs for school assemblies. Their performances were always exceptional — just ask any of her former students how she impacted their love for music and the arts. She was one of the teachers who ushered in the integration of students from all races and cultures when she was transferred from Carver to Gilcrease Jr. High, and then was transferred again to Hamilton Middle School. Her work as an educator spanned 30+ years in the roles from English teacher to Student Guidance Counselor to Dean to Assistant Principal. Even as a retired educator, she agreed to help with class scheduling at McLain and Central High Schools when a colleague called upon her excellent scheduling skills.

Mrs. Holley always shared her God given gift to all who were hungry to grow closer to God in knowledge, academic excellence, career choices, and in music ministry. She taught piano, organ, drums, and choir directing to many youth and adults wherever she served. No task was too small or too great for her to undertake, and she loved to impart excellence as the standard in musical skills to her choirs in each church she served throughout her days on earth. As a masterful musician and lead Worship Leader, always ushering us into the presence and highest praise and worship of our Lord and Savior Jesus Christ, she served Him until the final Sunday of her life. After a severe illness, she couldn’t wait to get back to that piano at Mt. Zion Baptist Church, Claremore. Much thanks is given, especially to Bro. Anthony Davis, who was always looking to help transport Mrs. Holley from the car to her seat at the piano where her fingers poured over the keys like melted butter on hot biscuits, and the congregation was led into the heart of worship and praise. At 91, she transitioned from the earthly choir to help lead the heavenly host as they praise even now at the feet of Jesus in the presence of God the Father and Creator of all the earth. She has had no greater promotion, and she is ready for any and all of us to join her on the day of the great awakening when every believer in Jesus Christ will join in praise and hallelujahs in our celestial home in Heaven.

“If I should go tomorrow it would never be goodbye”

Burial will follow Green Acres Memorial Gardens with Visitation Thursday 3:00PM til 8:00PM and 10:00AM til 5:00PM on Friday at the Funeral Home & Friday 6:00PM Alpha Kappa Alpha Sorority Services and 7:00PM Musical Tribute all at Mt. Carmel Baptist Church.