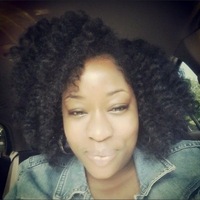 Nitonjia Lynnale Ibe was born on October 27, 1976 in Tulsa, Ok to Kathy and Manasseh Emeka Ibe. At the young age of 9 her mother met and married Ambrose Mure and he raised her as his own daughter.

Nitonjia was reared in the Tulsa Public School system. She attended Nimitz Middle School where she was in the orchestra, the choir and played the violin and in 1995 she graduated from Raymond S. McLain High School where she was in the choir and was a majorette in the McLain Scots Band. She later received her Bachelor’s Degree in Journalism at OSU and her Master Degree in Social Work at OU. Nitonjia was a member of the NABJ and pledged Alpha Kappa Alpha Sorority Inc. which was near and dear to her heart. When you saw Nitonjia you saw her proudly wearing her Pink and Green.

If you knew Nitonjia then you knew that the best part of her life was her “duo” as she called them, her children Marco Vann Jr. and Jada Scott whom she loved more than anything. There was not a day that went by that she was not talking about them because they were the loves of her life. Nitonjia enjoyed traveling, whether it was out of the country or down Rt. 66 with her children to Pops 66 Soda Ranch in Arcadia, Ok. Her passion for cooking led to her passion for entertaining and hosting events for her family and friends and eventually to her becoming the owner/creator of PoshCupcakez. Nitonjia had a special place in her heart for people but she really enjoyed staying home, curled up on her couch watching old sitcoms such as the Golden Girls or old movies that she could recite line for line. At the time of her passing Nitonjia was an employee with the Oklahoma Department of Human Services as a Child Welfare Specialist III and was loved by not only her co-workers and staff but even her clients because she left a positive impact on everyone she came in contact with.

For those who would like to attend the live stream please visist: