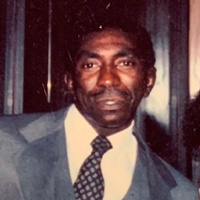 Kenneth Charles Wright was born on January 18, 1944, in Tulsa, Oklahoma to Estella Victoria Wright. The second of three children, Kenneth acknowledged his belief in Jesus Christ at an early age, was baptized and received his Christian teaching at Mount Rose Baptist Church. He received his formal educational training in the Tulsa Public Schools and graduated from Booker T. Washington High School in 1962. He attended college at the Technical Oklahoma State University Institute of Technology (Okmulgee Tech) where he majored in auto mechanics. Kenneth married Freddie Cowans and their union produced two daughters, Yolanda and LaQueta.

Over the years, Kenneth worked for several employers in Tulsa, including the warehouse for Buster Browns Clothing. Because of his love for working on cars and commitment to serving others, he was the go-to person and overall jack of all trades for family members, friends, and neighbors. He was the designated driver, mechanic, landscaper, painter and handyman for his mother and grandmother all of his life. A voracious reader, lifelong learner, and informed conversationalist, Kenneth enjoyed reading the morning and evening paper every day and watching the evening news, sports and his favorite sitcoms. He valued voting and always drove his mother and grandmother to the polls for local and national elections.

Kenneth was smart, dark, handsome, and an exceptionally sharp dresser. Though primarily an introvert, Kenneth was also outgoing at times and could be a handful, which is how he got his nickname and became fondly known as “Popcorn” to his family and friends. Kenneth’s quiet demeanor, warm smile, and helpful spirit brought smiles to everyone who knew and loved him.