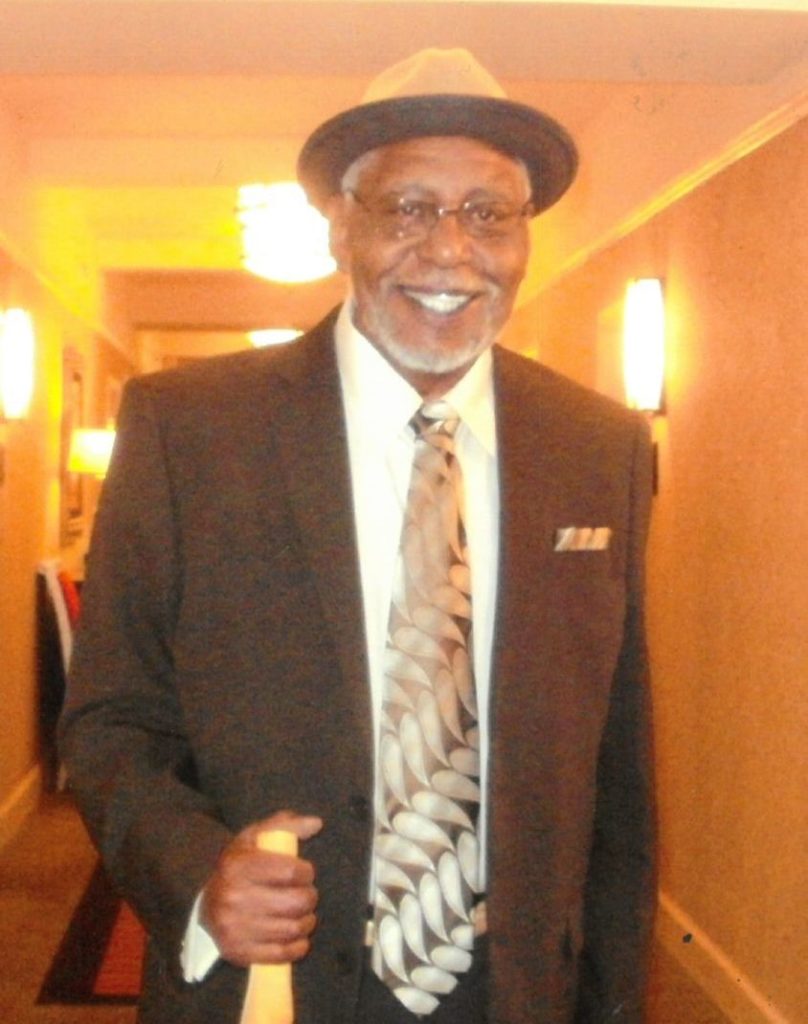 Depending on the day, and its circumstances, one may sing his praises; or, work to contemplate his honest origin. Both reactions ring true. That’s right, Big John, flawlessly personifies the human condition.

Get this. The intimidating physique sublimely couples with his bigger than life mouth PERSONALITY! It is only dwarfed, by his love for the Lord and his generous heart. Always, he thinks of others. Often, this altruistic spirit is lurking.

Even before, his untimely death on December 26, 2021, John is actively considering others. An overwhelming desire, to do right by his family, motivates Mr. Gatewood. So, he proactively makes his funeral arrangements. Years, proceeding his passing, he fully pays for all of his final expenses.

However, the following day, he returns to the funeral home and recoups a full refund. What else is there to say? John Gatewood is the consummate Gemini. Born on June 11, 1955 to the Harry Dee and the Johnnie Mae (née Davis), John is delivered into worlds of dignity and pleasure.

Moreover, in their respective fields, both of his parents are trailblazers. The disciplines of Education and Psychology combine to help rear a refined individual. Undoubtedly, he is blessed with a brilliant mind. Nonetheless, this calculating psyche is familiar with both malice and with benevolence. He too, enjoys blazing trails. Yup, that he does.

Truly, he is a complex tapestry of intricately woven environments. For instance, at an early age, as his Lord and Savior, John David, readily accepts Jesus Christ. Also, this Child of God, reverently grows to appreciate secular satisfactions.

So, the juxtaposition of Spirituality, Culture and Education, amid atmospheres of Gambling and Bootlegging, cultivates a remarkedly interesting person. Definitely, he has stories to tell. And – boy – does John enjoy the sound of his own voice.

Perhaps, it’s during his formative childhood that he discovers a love for language. As a child, of the ‘50’s and ‘60’s, he personally witnesses as the world begrudgingly changes. While, contesting White limitations, John defiantly stands tall. The broad shoulders are spread wide and his afro head is held up high. John wears a budding exuberance. Genuinely, he is ready to conquer it all.

Be that as it may, Life still happens. At only 12 years old, he experiences a resounding loss. His father – the decorated WWII vet, the esteemed Educator, turned Principal, turned Superintendent, turned entrepreneur – suddenly dies. Harry Dee was only 57 years old.

Consequently, a portion of John’s youthful innocence forever erodes. Although, this profound pain somewhat dulls, it never completely abates. All the while, somehow John is able to retain his signature dimpled-grin.

Throughout childhood, within a slew of subjects, he discovers an innate ability to easily learn and to excel. From becoming a chess champion, to effortlessly arousing the clarinet, it seems as though he can do it all. Regardless, of the task he confidently prevails.

Even during, his matriculation at Bishop Kelley High School, John easily stands out. Not even the daunting Integration can dim his light. Whether regarding, academics or athletics, John Gatewood unquestionably earns acclaim. In addition, to naturally becoming popular, John’s life changes when he meets, Ralph McIntosh, Jr.

Here, a lifelong bond is formed. At some point, the friendship transforms into a brotherhood. And by 1973, from the prestigious Catholic High School, the bros graduate.

Soon, John enrolls into St. Gregory’s University. There, he effortlessly earns a full-ride. This academic scholarship gives John a lot to celebrate. And, that he does. Eventually, he pivots from majoring in Engineering to other activities.

Before, entering Central State University (now U.C.O.), he has the opportunity to attend a few other institutes of higher education.  At Central State, John transforms from Mr. Big Man On Campus into an Absolute Icon. His academic prowess and his bone-crushing football antics molds him into THE Motherfucking Man. He is kicking ass and taking names.

Additionally, hordes of “lovely” women eagerly vie for his attention. However, it is when he meets the wholesome, Armru Grant, that his life completely changes. Immediately, he begins to introduce her as his Wife.

Following, a quick courtship the two are married around December 31, 1977. Although, the wooing merely lasts two weeks (¡¿ what was she thinking ?!), the marriage lasts almost thirty years. Three years of “Honeymoon bliss” ensue. At last, from this union, four children are born; two boys and two girls rounds out John Gatewood’s personal clan.

During the ‘80’s and ‘90’s, he encounters many rites-of-passage. Some of these contain more wrongs than rights; anyhow, this only further humanizes John. Almost resentfully, he encounters a common existence to which many Black become Broken. Relentlessly, he attempts to secure and to maintain his footing in the White Man’s world. Regardless, he refuses to lose.

As his children grow, he whole-heartedly immerses himself into their lives. Of course, Coach Gatewood, leads his Blue-T Panthers to a city-wide championship and several other reputable finishes. Here, he aptly employs his bellowing baritone.

As a die-hard Chicago Bears fan, and a student-of-the-game, Coach encourages the best from his football players. Possessing a complicated character, he may easily evoke tears or may completely calm the spirit. He demands their all; they willingly deliver. Moreover, one of his pupils even makes it to the National Football League.

In addition, to his coaching obligations he does his best at being a husband and being a father. So, he financially, emotionally, and spiritually provides guidance for his family. A wealth of tangible experiences, allows him to seamlessly navigate a plethora of different positions.  From Construction, to Sanitation, to Sales Clerk, to Cheffing and to finally “retiring” from the Department of Human Services, John aptly fits into many worlds.

Perchance, has it, that John derives the most joy from being the center of attention. Somehow, he becomes the most known, undiscovered Blaxploitation character. And, that ain’t no jive. The ladies absolutely love John David Gatewood. Why do you think he was forced to carry around that big dumb-ass stick?

If he’s commanding a class as a certified Taekwondo Master. He is in his element. If he is, talking shit jokingly referring to someone as a Frog-faced-fish-eyed-fool. Or, comparing them to a Buffa-Rilla (BIG as a buffalo and UUUGLY as a Go-rilla), his boisterous laugh is sure to follow.

Not once, not twice, BUT each and every time he went up on The Hill. Osage had to pay out Big MONEY to Old School. And, as The Supreme Domino Aficionado John David Gatewood, never ever ever – eeeeeeeever – lost a hand of bones. He ALWAYS devastated any unworthy adversary. With any competitive endeavor he reigns supreme. Or, something like that…

We all know how much he appreciates a tall tale. But, one thing, which remains certain, is how much he loves his grandson, Xavier Landen. To X, not only did he stress the importance of education, he was also instrumental in teaching him how to read. Xavier signified his hope for the future and the opportunity to get it right.

Ushering him into the afterlife, he meets with a host of cherished family members. Among a legion of Love, John jubilantly joins people such as his cousins Ricky, Dale and B.C. Of course, his baby brother Fred will eagerly show him around.

While, both sets his of grandparents will naturally pick up where they left off. Undoubtedly, his mother, Johnnie Mae is there with encouraging words. Finally, he is reunited with the father for which he always longed. Above all, God grants him the peace to assuaging any afflictions to his weathered soul.

Nonetheless, his enduring legacy is continually enriched by his family. An older brother, Harry Dee and baby sister, Marjorie Virginia, will forever relish their memories of John. Also, he leaves behind countless friends and family members.

No family is perfect. His ex-wife, Armru and their four children: Little John; Niki, Clarence and Stephanie are all aware of this. So, to him, they offer the utmost Grace. His nephews Trae and Dr. Jesse, along with Eric, Jr. and Evan will work to keep his memory alive.

Ultimately, his grandchildren Xavier, Erika, Imani and Jeremy are blessed to only know the best of him. Rest easy, John David Gatewood. Truly, you hit the world with a resounding bang. Your presence will forever be felt.

Even now, we refuse to wallow in muddled puddles of despair. We choose to remember you at your best. With that, we challenge ourselves to become our best versions. Together, we are His life eternal.