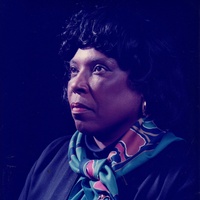 Evelyn was born March 1, 1934(84) in Sunflower Mississippi to Will and Lula Hopkins. Evelyn married Will Earnest Jones and had twelve children — Lula (Wayne Smith), Addie (Stephen Rathod), Ernestine (Emiah Butler), Willie Jones (Vanessa), Robert Jones (Lillie), Earlene Jones, Frankie Jones, Joanne ( Gravelly Miles), Rickie Jones (Rozalyn), Benjamin Jones, Maria (Dwayne Brooks), Danny Jones, and a host of grands, great grands, great great grands, nieces, and nephews. Evelyn is one of 13 siblings, two surviving: Larry Hopkins (Sophia) and Lucille Hopkins of Chicago, Illinois. She leaves behind a large family and a host of close friends to cherish her loving memory. Our Mother work as a maid at ORU, hotels, and later trained as X-Ray Tech with St. John hospital. However, our life changed after one of her friends Charles Douglas told her about a Priest by the name of Father Dan Allen, the founder of Neighbor for Neighbor organization that help the north Tulsa needed families and homeless people. After volunteering for neighbor for neighbor she was introduce to Father Skeehan who took Evelyn under his wings and inform her about a secretary positon in his office under The Church of the Resurrection. Father Skeehan hired someone to come and teach our mother all about becoming his secretary in her own home. Evelyn jones also went to night classes, John Burroughs Elementary in order to improve herself. Evelyn always had a strong drive to be educated and never wanted her family to be depended on welfare (which never happened). Once she learn all of the necessary skills she started her new Job as secretary under Father Skeehan; she worked for several years and was finally promoted to executive manager over the office which gave her the opportunity to work with other priest for thirty (35) years until retirement. We confirm that God order our mother footsteps through her life journey. God guided her on how to care and raise 12 children’s without a father figure. God blessed her with all of the beautiful people that played an important role in her life for whatever reason. {Like the one set of footsteps in the sand, it was God who carried us all the way.} Our Mother was a strong believer in working for God in the church, and didn’t mind helping wherever needed along with her witty humor which kept you laughing. Evelyn was a graceful, beautiful, praying, fearless woman of God with unshakeable faith and belief. Momma trusted God for everything in which he prove himself over and over again. Our Mother loved GOD as her personal Lord and Savior. She made it to Heaven and her eternity will be a never ending story and one day we shall meet her in GLORY!!