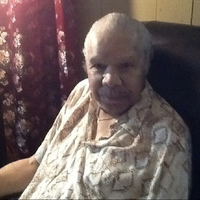 Donald Ray Ross passed peacefully from this world November 7, 2019 surrounded by love. He was born in Sapulpa, Oklahoma on December 17, 1940 to Willie and Grace Austin

Donald grew up in Sapulpa and graduated from Sapulpa High School. After graduation he enlisted in the Army and served proudly from 1958 until his honorable discharge in 1964.

Later Donald, affectionally called “Tut” married the love of his life, Carrie Mae Crawford on March 24, 1977 in Long Beach, California. They were blessed with two beautiful daughters, Kimberly and Tiana Ross. The family stayed in California until 1995 when they moved to be closer to family and to care for Tut’s father, whose health was failing.

Tut was a Ship Fitter, building submarines until his retirement. After retirement he drove a school bus for Jenks Public Schools. Tut was a master tinkerer, builder and carpenter. He could build or fix anything. If he wasn’t fixing, Tut loved to sing, dance and spend time with his grandchildren.

He is preceded in death by his wife, Carrie Mae Ross; parents, Willie Ross and Grace Austin; grandson, Da’Jon Ross.

Left behind to treasure his memory are daughters, Kimberly Ross and Tiana Ross; grandchildren, Myana Cathey, Davion Cathey and Chyenne Ross; brother, Jerry Hudson and his wife, Sandra and a host of family and friends.