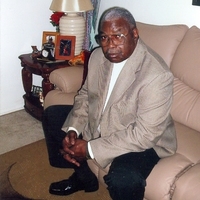 Robert D. Chandler was born in Haskell, Oklahoma on the 19th of February, 1934. He was the first child born to Earl and Almetta (Scott) Chandler. He attended Booker T. Washington High School in Sand Springs, Oklahoma. He was a gifted basketball and football player.

Loving the Lord with all his heart, led Robert to be reunited with the Camp Chapel A.M.E. Church in West Tulsa early in his life. He remained a member at Camp Chapel A.M.E. until all of his children were grown. He and his wife, Annie, would later unite with Greater Cornerstone Baptist Church under the direction of Pastor Willard Jones.

Robert met and fell in love with his soul mate of sixty-two years, Annie. To this union eight children were born Sheryl, Robert, Suzanne, Russell, Sonja, Richard, Raymond and James.

His chosen profession was a big rig (eighteen-wheeler) operator. He drove for a number of years.

In 2003, Robert recieved an reward for driving 3 million miles without and accident. Later in 2011, Robert decided it was time to retire. He soon adapted to the fact that he was retired although he loved working.