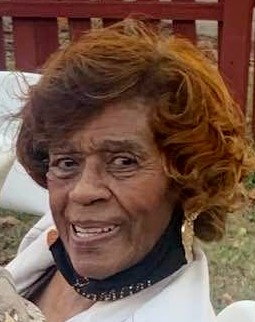 In Taft, Oklahoma on February 28, 1936, Willie and Canzaty Smith welcomed into this world a beautiful baby girl that would become her mother’s namesake, Canzaty S. Smith.  The family and her friends lovingly called her Candy.  But if you really know her, you would call her “Bootlie”.

Candy grew up in a loving home, along with her siblings, Willie Mae, Buddy, Rillastine, Emma Joyce, Floyd, Lelia and Daniel Joe.  Taft was a place full of life, family and friends.

She was educated at Moton Schools, home of the Fighting Panthers.  Candy was tough as nails and could hunt and fish with the best of them….. her brother, Buddy.  Being the daughter of a trapper, she learned the skills on how to use a rod and a gun.

Knowing the goodness of the Lord, Candy accepted God as her personal Savior at an early age. She was baptized at First Baptist Church of Taft by Rev. Davis.  As life took Candy to different locations around the country; she never forgot who the head of her life was. When she returned to Tulsa, she united with the Shiloh Baptist Church under the direction of Rev. H.D. Morris.  She remained a member until God called her home.

Candy had three heartbeats; hers, Evans and Glen Jr.  In 1952, God saw fit to bless Candy with a beautiful daughter, Evans.  One year later, she met and married a military man from Taft named Mr. Glen Cullom.  To this union, one son was born and he was named after his father, Glen Cullom, Jr.  This young family moved from Oklahoma to New York. Although this the marriage didn’t last, the two remained friends.  Love hit Candy a second time and she married Mr. L. C. Coleman. This married was dissolved but they too remained friends.

After leaving Taft, Candy moved to Tulsa.  While in Tulsa, she worked at various places, Tulsa Linen was one of those places.  She found her niche’ in life.  Under the direction of Mrs. Lucille Troupe, she became a beautician.  Honing in on her trade, her named became synonymous with the best beauticians in Tulsa. She had a shop on Deep Greenwood and ultimately created her own shop in her home.  Everybody who sat in her chair walked away with a fresh look and some wisdom. Wisdom about hair, life, love and men.  She shared her knowledge about the business with younger beauticians.  She wanted them to be entrepreneurs and shop owners as well.

Being a Renaissance woman, Candy was easily labeled a jetsetter, a trendsetter, an influencer but today she would be simply called a “BOSS”.  She was like Harriett Tubman, she didn’t take no mess and didn’t run from none either.  She worked as hard as man but was definitely beautiful like a woman.  She lived in New York, California and Alaska until The Great Alaska Earthquake of 1963.  She left Alaska driving and never looked back.

Candy was a sportswoman; she bowled, played softball and traveled.  She was an avid card player.  You could play cards at her tables, (there where multiplies) but you had to pay to play to learn.  Which would make you learn how to play really fast.  She chartered buses to casinos before there where casinos on every corner.  If you knew Candy, you knew a women who wore many hats, loved her family, told it like it was and loved you through it all.  Her home was a safe place for everyone, a real no judgment zone.