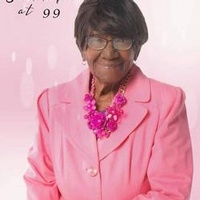 ” A beautiful jewel has folded her tent and moved upstairs”
Mrs. Hazel Dolores Smith -Jones
Ms. Hazel Smith – Jones, one the last survivors of the 1921 Tulsa Race Massacre has transitioned from labor to reward. Ms. Jones faithfully told her family’s account of the tragic Greenwood Massacre and now she’s resting in the arms of the one who kept her safe.

Ms. Hazel was a strong supporter of the youth at her church. Her request was , in lieu of flowers, please make a donation to the Youth Department at North Peoria Church of Christ. Hazel Dolores Smith was born on January 8, 1919 in Tulsa, Oklahoma. She was the eighth child of thirteen children born to the late Willie and Maggie Smith. Hazel attended Tulsa Public Schools and graduated in 1938 from Booker T. Washington High School. Shortly after high school, Hazel met Earl H. Jones, Sr. and they were married a year later. Their union lasted for a wonderful 47 years. Three children, Earl H. Jones, Jr., Yolanda (Jones) Mitchell and Hazel B. Jones-Moses were added to this union.

During World War II, Hazel moved to Oakland, California and worked as a welder. She later returned to Tulsa and attended the Madam C. J. Walker Beauty College and graduated in 1947. Hazel also worked for the Meadowbrook Country Club. Hazel became a pastry cook for the Tulsa Public Schools in 1966 for eighteen years and traveled to nine states for cooking conventions. She retired from Tulsa Public Schools in 1984. When retirement did not suit her, she took a job at Life Senior Services as an assistant to the receptionist. Hazel worked there for eleven years through a program called Reaching Hands. Hazel accepted Christ at a young age and became a member of The North Peoria Church of Christ in 1961.

At the time of the 1921 Race Riot, she was only two years old. Hazel was active with traveling to different states, speaking with the survivors. She truly enjoyed her trip to Oklahoma City where the Northeast Church of Christ presented the survivors with a Proclamation toward the Tulsa’s Journey of Healing. There was also a movie premiere “Before They Die”. Hazel’s Motto was: Always put God first in your life. Her favorite saying was, “God is good to me without Him I never would have made it.”