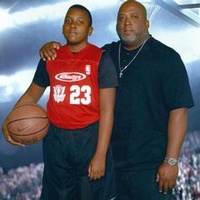 “On Saturday January 20, 2018 in Arlington, Texas Mr. Reginald A. Bell gave his soul to the Lord and entered in to the Kingdom.”

On April 29, 1975, in Tulsa, Oklahoma Maggie Jean Roberts and Q.L. Bell were blessed with a bouncing baby boy and affectionately named him, Reginald Ashley Bell known to many as “Reggie”

Reggie attended Tulsa Public Schools in Tulsa, Oklahoma attending Roger High School. Reggie was very athletic and played the position of quarterback in football but he excelled in basketball. Reggie had great passion with surrounding himself around his family and friends. As a young child, he always love to be amongst the crowd. He enjoyed life and was full of fun.

Reggie accepted Christ as his Lord and Savior. He united with Timothy Baptist Church of Tulsa, OK.

Before completing high school, Reggie acquired a good work ethic. He worked at local grocers, Burlington Coat Factory and Ultimate Electronics of Tulsa. Subsequently, he gained employment at American Airlines of Tulsa as a stock clerk. Reggie relocated to Arlington Texas in 2007 and eventually was promoted to Material Logistics Specialist. He loved his job and his American Airlines family. On August 1, 2017, Reggie celebrated 20 years of service to American Airlines and this accomplishment bought him great joy.

Reggie was blessed with two beautiful children, Keyonna Dayshawn Clayton and Jalen Bell. On November 10, 2017, Reggie welcomed his first grandchild, Ahmir Qwayne Wise.
Reggie and Derecia Anderson met in 1991 and they remained friends for over 27 years. In 2012, Derecia relocated to Arlington to give love another try and the couple have remained companions and true friends until his untimely death on January 20, 2018.

On January 20, 2018, Reggie found perfect peace as he fell asleep in the Arms of Jesus. On this day February 3, 2018, his mother’s Heavenly Birthday we celebrate and bid farewell to a precious son, brother, father and grandfather. He was preceded in death by his mother, Maggie Jean Roberts; grandparents, Butler and Velma Haskin Roberts, Hubert and LCannie Bell; uncles, Lawrence Roberts, Lonnie Roberts, Clinton Roberts; one aunt, Jessie Mae Roberts.

17 responses to Mr. Reginald A. Bell