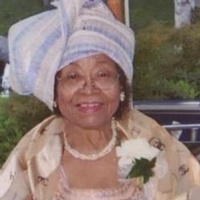 Following the early loss of her Mother, V.Essie moved to Tulsa, Oklahoma at the age of 6, where she thrived under the nurturing care of her maternal Aunt, Mrs. Essie Michael Reed, noted cateress and seamstress, and Uncle Otto Reed, barber and community entrepreneur. She attended the historic Booker T. Washington High School and graduated in the Class of 1938, making many lifelong friends whom she cherished through the years.

A quiet, studious young lady with a charming smile, V.Essie excelled in her studies and entered the Freshman Class of 1938 at Kansas State Teachers College (now Kansas State University, Pittsburg), where she was selected Alpha Kappa Alpha Ivy Princess, with high hopes of becoming a teacher.

When financial challenges did not permit her to fulfill her dream, V.Essie refocused her energy on building a strong foundation for her future, working with Aunt Essie and in a variety of positions in the community. Later, she served as a church pre-school teacher and school nutrition service assistant with Tulsa Public Schools.

As history would record, V.Essie met her future life-long partner, Arbie Lee Conley, in Tulsa, when Arbie’s brother Richard and V.Essie’s sister Elsie thought their younger siblings would make a “nice couple.” Their union was blessed with three children, Virginia, Arbie, Jr., and Prentice. She was a fastidious homemaker, known for her pineapple upside-down cake and banana pudding culinary delights. Having lost her Mother at an early age, V.Essie was committed to being a devoted Mother, which she achieved with impeccable honor and distinction.

In an interview celebrating Mother’s Day a few years ago (“A Mother’s Wisdom”), Sister Conley shared her experience on what being a mother means to someone who had 63 years of experience! She believed it was important for parents to be involved in their children’s lives, giving kids boundaries, and being good examples for their children. She felt that having a good relationship with her children was so important to her and to her husband that the sacrifice was worth it. Not only did V.Essie believe this, she LIVED IT!

Together, the young couple were active participants in their church activities at the famed First Baptist Church, North Tulsa, where V.Essie joined as a child under the pastorate of Rev. C. L. Netherland. She especially enjoyed singing in the Young Adult Choir. When Arbie accepted his call to the ministry under the leadership of renowned pastor, Rev. Calvin K. Stalnaker, the Conley family became an integral part of the ministry and were honored as the “1954 FBCNT Church Family of the Year.” A devoted Mother to not only her own children, V.Essie was a revered community mentor to many young women and youth over the decades, including her own BTW classmates Naomi Siplin and Anna Mae Steele as well as the Alumni classes of her children–classmates who shared many fond memories of the Conleys.

A proponent of Lifelong Learning, with her husband Arbie, V.Essie co-founded Corinth Baptist Church and the Corinth Day Care Center of Tulsa, which served the community over three decades. The couple, who celebrated their 69th Valentine Day Wedding Anniversary was especially proud of their 3 college-educated children.

A woman of quiet elegance, spiritual grace, humility, and perseverance, V.Essie loved traveling, deeply appreciated the self-less hospitality of her son and daughter-in-law Prentice and Gloria, and enjoyed her cross-word puzzles and word games, remaining sharp, alert, and active, until her health declined.

Her services will be Saturday January 20, 2018 10:00am in the First Baptist Church North Tulsa with Senior Pastor Anthony Scott.

She will be laid to rest next to her Husband Rev. A.L. Conley at Crown Hill Cemetery, Tulsa, Oklahoma.