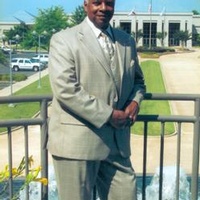 “Rev. Walter Smith,Pastor of Phillippi Baptist Church Tulsa, Oklahoma after 68 glorious seasons with us. “heard a loud voice like the sound of a trumpet,” On the early morning of December 21, 2017 at 10:20am. Services: Thursday, December 28, 2017 at 10:00am Mt. Rose Baptist Church 1147 N. Martin King Blvd.
Walter James Smith was born on September 12, 1949 to Carl and Annie Smith in Charlotte, North Carolina. He was one of seven children born to this union.

The family ultimately relocated to Tulsa, Oklahoma and Walter received his formal education from Tulsa Public Schools graduating from Booker T. Washington High School in 1969. In April of 1970, he joined the United States Air Force where he served his country for four years as a Control Combustion Specialist. Walter believed in hard work and was respected by friends and colleagues. After completion of his duties as a full-time soldier, he returned home and to work for Southwestern Bell of Tulsa retiring after 32 years of service. Additionally during his career, he found time to service in the Air National Guard.

After friendly courtship, In December 1974, Walter were united in Holy Matrimony to Constance Wilson and they with blessed with a beautiful daughter, Briana. As a family they united their faith and hope in the Lord with the Greater Faith Baptist Church where he diligently served as a deacon. Walter was called into the ministry and became an ordained minister of the Gospel of Jesus Christ in 1982 under the leadership of Pastor Jimmie Dixson. Although this marriage was later dissolved the couple remained friends.

Walter met Arabellia McBee of Tulsa and the couple were joined in Holy Matrimony in February of 2003. He remained a loving husband, father, and grandfather until his demise on Thursday, December 21, 2017.

Walter entered into eternal rest at 10:20 on the morning of Thursday, December 21, 2017, He was preceded in death by his parents, Carl and Annie Smith; and brothers, Cam D. Smith, Jr. and Larry Smith.