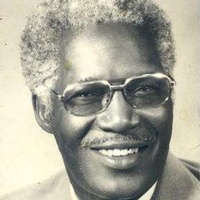 Theodore “Ted” Owens, 80 years young, of Tulsa, Oklahoma, transitioned from time to eternity on October 12, 2017.
Ted was born in Tulsa, Oklahoma on January 28, 1937. Having attended Booker T. Washington High School, he graduated from Dungee High School in Oklahoma City, Oklahoma in 1956, and entered military service in the U.S. Navy serving his country as a Navy Journalist and Photographer stationed in San Diego, California. His military service took him to many exotic parts of the world, including Japan, Hong Kong, and other parts of the Far East. As a trained journalist and photographer in the Navy, he was assigned to chronicle the experiences of sailors from Seamen to Admirals. Upon being honorably discharged from the military after four years of service, Ted returned to Tulsa where he later attended the University of Tulsa, and began a career in telecommunications with Southwestern Bell that would span almost 30 years and see him rise to become the first Black manager in Oklahoma with Southwestern Bell. During his tenure with Southwestern Bell, Ted would be called upon time and time again to provide his particular brand of leadership and empowerment to the teams and departments he was tasked with helping to lead. To most in the organization he was known as a straight shooter and real difference maker.
Upon retiring from Southwestern Bell Ted decided to become his own boss and with his wife Jane and youngest son Thomas started The Owens Group LLC. Having studied accounting at the University of Tulsa, Ted opened his own Bookkeeping and Tax Preparation business in the historic Greenwood District near downtown Tulsa. Ted practiced Bookkeeping and Income Tax Preparation with The Owens Group for over 20 years and remained a sought after financial services professional for many years after closing his Greenwood office.
He accepted Jesus Christ as his personal Lord and Savior as a teen, and was an actively involved member of Paradise Baptist Church where in his early years he was mentored by the late Rev. J. Castina Jackson who helped significantly to shape his relationship with God and his life perspective. Ted was a very active member of his church, serving as Chairman of the Deacon Board, Trustee, Sunday School Teacher, Finance Committee Member, and in many other capacities. He was also a member and Past Chairman of the Board of the Hutcherson Branch of the YMCA in North Tulsa, helping to create positive life experiences for youth and families of North Tulsa.
Ted was married to his junior high school sweetheart and the love of his life, Jane Evelyn (Pitts) Owens in September of 1962. The marriage lasted 55 years, and was filled with unconditional love, undying support, and unwavering commitment to each other.
He is survived by his loving wife Jane, his two sons and their wives, Thomas and Fran Owens and Timothy and Jennifer Owens. He is also survived by his six grandchildren, Darius Owens, Dosha Owens, DeMarcus Owens, Uriah Owens, Lee Prince, and Carlton Monroe, as well as one great granddaughter Chyla Monroe. Ted is also survived by two sisters, Glenda and Juanita, and one brother Ronnie. He was preceded in death by his brother Jimmy, mother Alice, and father William. He also enjoyed a close relationship with cousins John and Raymond Hinton.